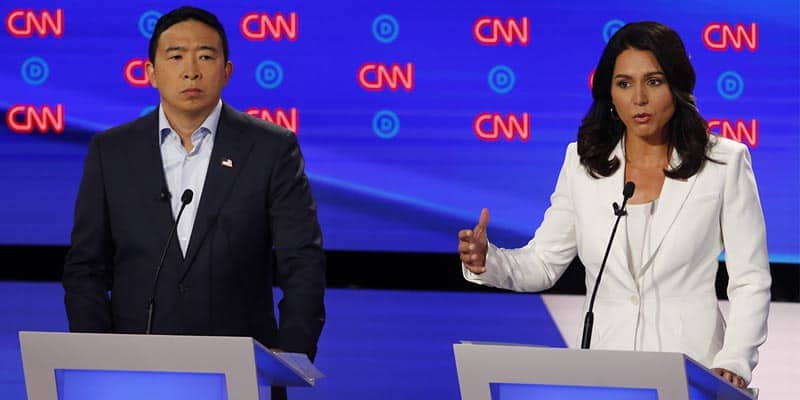 Andrew Yang, Tulsi Gabbard Need One Poll To Qualify For Most Vital Debate Of Their Campaigns

For entrepreneur Andrew Yang and Hawaii Rep. Tulsi Gabbard, qualifying for the December debate stage could provide both with the biggest boost to their poll numbers and odds to become the 2020 Democratic nominee.

But with a week left until the Dec. 12 deadline, neither candidate has qualified for the debate in Los Angeles on Dec. 19.

The threshold for the December debate requires candidates to get 4% in four polls or 6% in two early state polls as well as 200,000 unique contributors, with 800 in 20 different jurisdictions.

Yang and Gabbard have easily met the donor requirement, and both need one more DNC pre-approved poll to lock in their spot on the stage.

Currently, only six candidates will be on the debate stage in less than two weeks. Those who’ve qualified are as follows:

As previously mentioned, the December debate has the potential to skyrocket Yang and Gabbard’s chances of winning the Democratic presidential primary.

If both make the stage, then that brings the field to eight candidates—the fewest number of participants for any debate thus far.

This is important for both candidates’ chances because not only will it keep their campaigns in the national spotlight, but with fewer people on the stage, Yang and Gabbard will most certainly receive more speaking time.

Despite both candidates polling above several others on stage in past debates, Yang and Gabbard have frequently placed at or near the bottom of the “speaking time” metric.

Last month’s debate talk time given by MSNBC and the Washington Post moderators was particularly brutal for Yang. Even though he consistently polls in the middle of the pack, the moderators didn’t ask Yang a question until the 32-minute mark and only received roughly seven minutes of talk time.

POLITICO and PBS NewsHour are co-hosting the next debate, so hopefully, talk time will be more representative of each candidates’ current polling.

When looking at their chances to win the nomination, both candidates have experienced virtually no chance for a couple of months.

Yang’s odds are fifth overall and currently sit at +900, which indicates he has approximately a 10% chance to win the Democratic nomination.

The latest nominee odds for Gabbard show her in either place at +2500. When converted to an implied probability, we see that she has 3.85% to finish with the most primary delegates.

Both candidates hold substantial betting value if they manage to get on the stage with the next week. On the flip side, if either Yang or Gabbard fails to make the debate, it’s reasonable to assume that we’ll see their odds plummet, resulting from their time in the national spotlight beginning to dim.