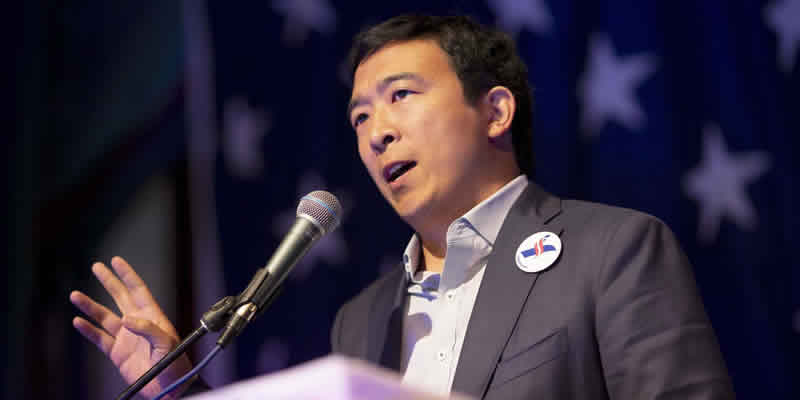 After being labeled a “longshot” by most and having absolutely “no chance” by others, oddsmakers made it clear this week: Andrew Yang is now a 2020 presidential contender.

Yang, a 44-year-old entrepreneur from New York, made headlines this week after announcing on Twitter that he had officially qualified for the Democratic debate in June after surpassing the 65,000 individual donation total required by the Democratic National Committee.

We did it!!!! THANK YOU everyone who supported us to make it happen!!! 👍😀🇺🇸 First stop debates next stop White House!!! pic.twitter.com/i5XXkotffH

And whether it was the result of a sudden influx of public money that came in on the Democratic hopeful or just the majority of bookies immediately seeing way too much value being left on the board, choosing to readjust their numbers, sportsbooks and political prediction markets around the world were quick to adjust Yang’s 2020 presidential odds.

We’ve been tracking Yang’s 2020 presidential odds at Bovada and BetOnline, two of the biggest online sportsbooks in the world, since he first appeared on the board at +5000 — or 50 to 1 (an implied probability of 1.96%) — back in February, more than a year after he announced his campaign in Nov. 2017.

Since Monday, however, his chance of winning the presidency next year have essentially doubled, and at Bovada, his odds have increased by a whopping 3000 points, putting him only behind President Donald Trump (+230), Bernie Sanders and Kamala Harris (+600), Joe Biden (+700), and Beto O’Rourke (+1000).

However, Yang has been aware of his 2020 presidential odds as far back as July 2018, tweeting that Las Vegas bookmakers listed him at 200 to 1 (an implied probability of 0.5%).

Vegas giving my campaign 200 to 1 odds to win the White House in 2020. Not bad. You see 200:1 upsets in sports every year. Good time to make a gamble 😉 pic.twitter.com/DehXe9wQeG

In an interview with The Washington Post, Yang credits his February appearance on the Joe Rogan Experience — one of the most popular podcasts in the world — for bringing mainstream attention to his campaign.

“It seems like a lot of people started paying attention all at once,” Yang told The Washington Post.

Yang, the son of immigrant parents from Taiwan, founded Venture for America — a nonprofit that helps train recent graduates on how to work for startups — has helped bring attention to the increased growth in automation, which is expected to have serious effects on the economy in the next decade, leaving a substantial number of workers without a job.

The focus of his campaign is to implement a Universal Basic Income (UBI), which he said would be a value-added tax (VAT) on tech companies that would pay all U.S. citizens who are age 18 and up a guaranteed $1,000 per month.

The theory is that by giving every adult a guaranteed $12,000 each year, it would encourage people to invest back into the economy, allow many to consider starting a small business and give people a chance to save while paying for living expenses.

Time will tell whether Yang can truly challenge the household Democrats and President Trump. We won’t have to wait long, however: The first Democratic debate will take place in June, and Yang is guaranteed a spot on the stage.

So, does Yang have a chance of being elected the next President of the United States in 2020?

If you believe the odds, then yes — a rather good chance, in fact.