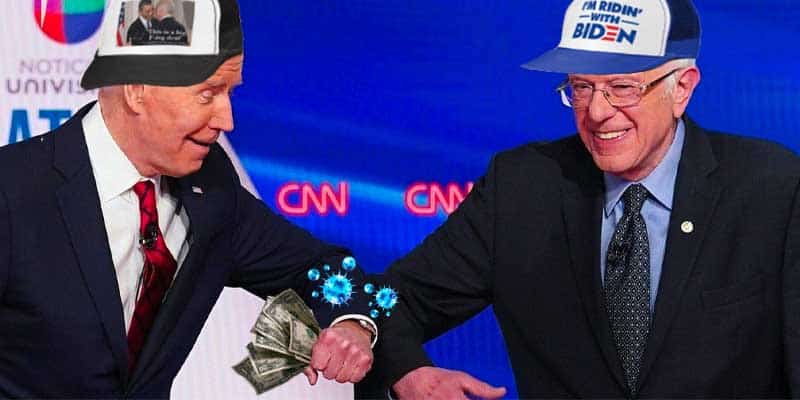 The 2020 presidential election, and the race for the White House, has officially begun.

Bernie Sanders officially ended his campaign on Wednesday, April 8, and his Twitter account posted the live stream of the announcement. The decision means any bets on Joe Biden’s Democratic nominee odds will payout various sums based on when the initial wagers were placed.

Today I am suspending my campaign. But while the campaign ends, the struggle for justice continues on. https://t.co/MYc7kt2b16

Why Bernie Dropped Out

The Vermont senator suspended his 2020 bid after the campaign came to the conclusion that the path toward winning the nomination or surpassing 1,991 delegates, was mathematically improbable.

“I wish I could give you better news, but I think you know the truth, and that is that we are now some 300 delegates behind Vice President Biden, and the path toward victory is virtually impossible,” Sanders said during the live stream. “So while we are winning the ideological battle and while we are winning the support of so many young people and working people throughout the country, I have concluded that this battle for the Democratic nomination will not be successful. And so today I am announcing the suspension of my campaign.”

Bernie added: “Over the past few weeks, Jane and I, in consultation with top staff, and many of our prominent supporters, have made an honest assessment of the prospects for victory. If I believed we had a feasible path to the nomination, I would certainly continue the campaign. But it’s just not there.”

The odds for the 2020 Democratic nominee betting markets were nothing short of a now-closed Disney World theme park rollercoaster over the past 16 months.

Political bettors who had money riding on Biden’s nominee odds will now receive a payout from sportsbooks and prediction trading sites, depending on whether your oddsmaker chooses to grade the wager now or wait until the former VP is officially declared the nominee at the Democratic National Convention in August.

Either way, after a rough March and with the dropout announcement today, the suddenly longshot odds for Sanders winning the party’s nomination have been removed across all political betting sites.

According to the historical 2020 election odds data from this primary cycle (January 2019 to April 2020), the best time to bet on Biden was the night of February 22 — right after Sanders won the Nevada caucuses.

With his campaign needing a desperate win in South Carolina, Biden was listed at +800 after the NV results came out, and oddsmakers gave the former VP only a 9% chance to win.

Anyone who bet $100, for example, on Biden +800 just six weeks will now win back their initial wager plus $800 since Sanders dropping out means Joe has got the nomination in the bag.

The following table includes the monthly Democratic presidential nominee odds for both Joe Biden and Bernie Sanders over the course of the 2019-2020 election cycle.

Based on Bovada Political Futures

President Donald Trump’s re-election odds continue to be favored after Joe Biden all but clinched the nomination following Bernie Sanders’ decision to drop out of the race on Wednesday.

However, Bovada oddsmakers have released new presidential prop bets that feature both candidate’s chances in the swing states for the general election on November 3, 2020.

Below you’ll find the updated 2020 election state betting odds. Bovada has pinned 15 states as potential backgrounds that could see electoral college votes go to either Trump or Biden.