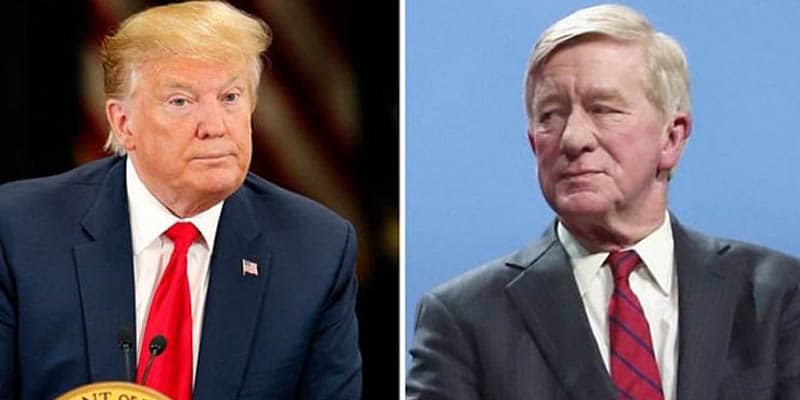 Can Bill Weld beat the odds and win against Donald Trump in 2020?

Bill Weld, former governor of Massachusetts, officially announced he is running for president in 2020 on Monday, becoming the first Republican to challenge President Donald Trump (+175|36.36%) for the GOP nomination.

In his 2020 campaign video, it says “Bill Weld beat the odds” when he was elected governor of Massachusetts in 1990, winning as a Republican in a historically blue state, and that he can do it again by beating Trump.

But can Bill Weld really beat the odds again and win against Trump in the GOP primary?

In short: It is not impossible, but it is improbable.

The former governor currently does not have any betting odds available, so that’s not a good sign for him.

But to be fair, this will likely change soon once all of the nonsensical celebrity odds are taken off the boards at the online sportsbooks.

Then again, Trump was always one of those odds in the past, so who knows — maybe Mark Zuckerberg at +30000 is a great value (but seriously, don’t take that bet).

Instead, let’s look at Weld’s opponents’ odds to see what is the likelihood that Trump wins the Republican nomination.

When converting -600 to an implied probability, we can see that the oddsmakers at MyBookie are giving Trump an 85.69% chance to be the GOP nominee for the general election.

And likely because of constant discussions over impeachment, Vice President Mike Pence sits at +750, which is an 11.76% implied probability if you still think Trump will get impeached within the next year and the party’s nomination will go to the VP.

However, it’s safe to assume that’s not going to happen and because of that, we can actually add Pence’s probability to Trump’s chances, which gives him 97.45% implied probability.

If we ignoring the rest of the GOP politicians on the board, it’s safe to assume that Weld would have an implied probability of 2.55% and his betting odds would be roughly +3800 to beat Trump in the primary.

That’s a very rough estimate, to say the least, but it’s more or less in the ballpark of what the oddsmakers will likely put on the board in the coming weeks.

Keep in mind, however, that’s just to beat Trump in the primary. His odds of doing that and winning again in the general election are astronomically low, especially considering that the Democrat party is currently favored to win the White House, regardless of who wins the nomination.

And none of this is even taking in the fact that Trump is extremely well-liked by his own party, boasting an 89% job approval rating from Republicans, according to a Gallup poll conducted April 1-9, 2019.

Being elected president is an entirely different ball game from winning a gubernatorial election.

So much so that a reasonable sports comparison would be how much more difficult it is to play in the National Football League than college football since percentage-wise only a very small number of college players will make it to the pros.

So, if running for governor is playing college football and running for president is competing in the NFL — and winning is being the best in either sport — then Donald Trump is from a third, completely separate sport — like golf or something — who came out of nowhere and won the Super Bowl, the 2016 presidential election.

Not to mention, he has pretty much been untouchable ever since he announced his 2016 presidential campaign because candidates continue strategizing against Trump as if he’s a football player.

He’s not. He’s a golfer (literally and in this analogy) who’s established a new “meta” for pro football (aka presidential politics) and candidates who believe what worked in the past will work against Trump in 2020 are foolish.

And make no mistake: Trump will win re-election next year if the NFL players, i.e. Weld or any of the 2020 Democratic candidates, don’t figure out how to beat the golfer at football.

Weld may have beaten the odds in the Massachusetts gubernatorial race nearly 30 years ago, but the game has changed since then.

His campaign announcement video was right to say that his win back then was a historic victory.

But beating Donald Trump wouldn’t be a historic victory: It’d be a miracle.

And you should never bet money on a miracle.