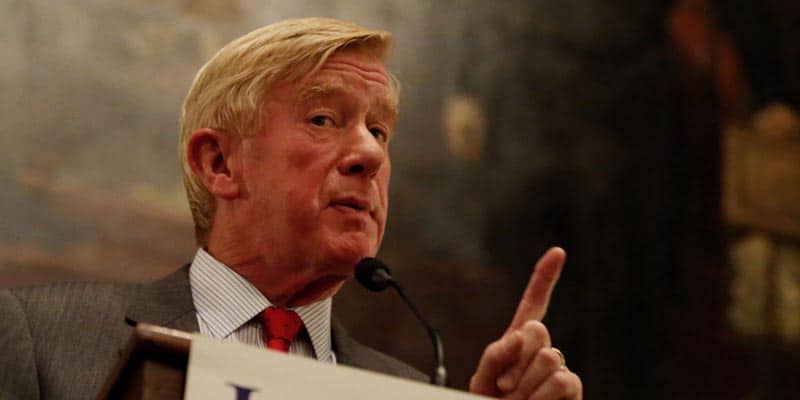 It looks like the president now has his first primary challenger for 2020.

Former Massachusetts governor Bill Weld announced on Friday that he will challenge President Donald Trump in the 2020 Republican presidential primary.

“I hope to see the Republican Party assume once again the mantle of being the party of Lincoln,” Weld said. “It upsets me that our energies as a society are being sapped by the President’s culture of divisiveness in Washington.”

“Because of the many concerns I’ve talked about today,” he stated. “I’ve established an exploratory committee to explore the possibility of running as a Republican in the 2020 presidential election.”

With the announcement, Weld becomes the first notable person to take on President Trump, who will seek the 2020 GOP nomination in his effort for reelection to a second term as president.

A sitting president hasn’t been challenged for a party’s nomination since 1992. George H.W. Bush was the last incumbent president before President Trump to have a noteworthy challenger for the primaries.

Currently, the 73-year old former governor doesn’t yet have any odds posted to win the Republican nomination or the 2020 President Election, but this will likely change in the coming days, and we will follow up on the story as soon as the odds are listed.

In front of an audience at the New England Council “Politics & Eggs” breakfast in Bedford, New Hampshire, Weld said he and the exploratory committee will determine over the next few months if he can raise enough money to fund his campaign. President Trump is currently estimated to have raised over $100 million for his 2020 campaign.

Weld declared that it was time to stand up to President Trump, saying the sitting president “acts like a schoolyard bully” and is “a president whose priorities are skewed to the promotion of himself rather than toward the good of the country.”

He then added that the Washington D.C. Republicans “exhibit all the symptoms of Stockholm syndrome” for sitting back and allowing it to happen.

“The truth is that we’ve wasted an enormous amount of time by humoring this President, indulging him in his narcissism and his compulsive irrational behaviors,” he said.

“In every country, there comes a time when patriotic men and women must stand up and speak out,” Weld said. “In our country, this is such a time.”

Weld, who ran for vice president on the 2016 Libertarian Party ticket with Gary Johnson, added that his campaign will make fiscal responsibility a priority.

It will be an uphill battle for Weld, who’s odds of beating President Trump and winning in 2020 will likely be extremely low when they are posted. President Trump’s odds are currently +150 at BetOnline, which gives him an implied probability of a roughly 40% chance of being reelected at this present time.

President Trump is also still very popular among Republicans and has an 89% approval rating, according to a Gallup Poll conducted in January 2019.

But Weld seems up to the task, as difficult as it may seem, adding that the American people have experienced enough of President Trump in just two years.

“We don’t need six more years of the antics we have seen.”