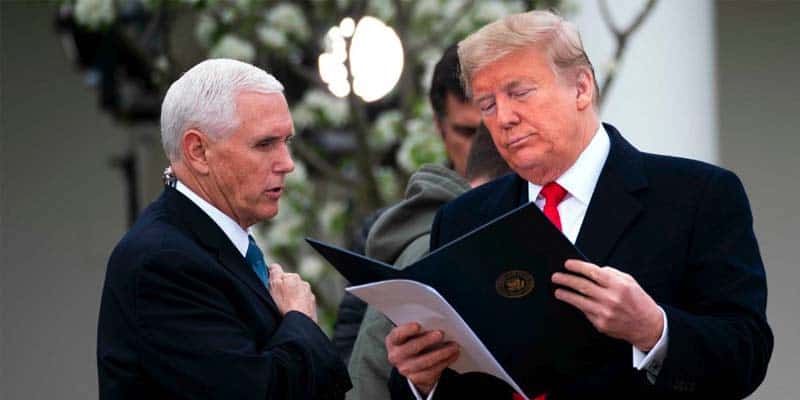 But is $2 trillion enough to prevent a recession during President Donald Trump’s first term in office?

Bovada oddsmakers have weighed in with a new 2020 election political prop that predicts there is a strong chance the U.S. economy will experience negative GDP growth for two consecutive quarters.

Will There Be A Recession In Trump’s First Term?

The betting odds for Trump holding office during a first-term recession are not favorable for the President, who also holds the smallest of edges over Joe Biden, according to the current 2020 election futures.

Trump is no stranger to beating the odds as the underdog as he did in 2016—he was never considered a “longshot” at the political betting sites like he was by the vast majority of media pundits.

However, his odds of avoiding a recession are a fair bit longer than his 2016 election chances. “No” is listed at +475, which gives a bet against a two-quarter GDP slump a 13.71% implied probability of winning after the juice is removed.

If Trump manages to beat those odds and turn the economy around in the wake of coronavirus, then a $100 wager wins $475.

The bipartisan agreement for the $2 trillion stimulus deal was announced hours after midnight Wednesday and comes as the number of COVID-19 confirmed cases (60,263) and deaths (812) continue to rise in the United States. Coronavirus numbers are from Worldometer at the time of writing.

After the deal was struck, Senate Majority Leader Mitch McConnell made the formal announcement on the floor of the upper chamber of Congress.

“At last, we have a deal,” McConnell said. “After days of intense discussions, the Senate has reached a bipartisan agreement on a historic relief package for this pandemic. We’re going to pass this legislation later today.”

.@senatemajldr: At last, we have a deal. After days of intense discussions, the Senate has reached a bipartisan agreement on a historic relief package for this pandemic.@SenSchumer: This agreement is really an outstanding agreement. To all Americans, I say help is on the way. pic.twitter.com/X439tcJigQ

The bill is the largest fiscal stimulus package in history. While all the details aren’t known yet, here’s a brief overview of what’s been reported to be in the final draft ahead of today’s vote:

If you’re interested in wagering on other political futures and props while in quarantine, check out our Coronavirus 2020 Election Betting Odds Guide. We breakdown the impact the viral disease has had on the chances for the remaining presidential candidates and provide updates whenever the top political betting sites post new coronavirus-related political props.