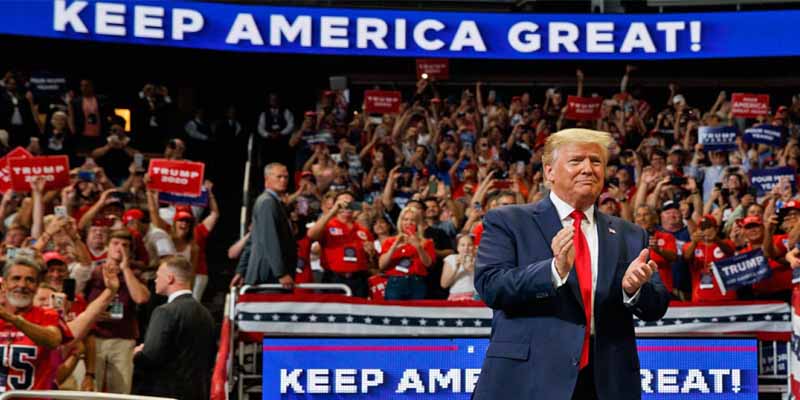 President Donald Trump formally announced his 2020 reelection campaign Tuesday at a MAGA rally in Orlando, Florida, almost four years to the day since launching his 2016 bid from Trump Tower.

From the news media to the Democrats seeking to run against him in next year’s election, Trump vowed to “Keep America Great” and slammed what seemed like all his opponents — from 2016 and now — sparing no expense and giving them no quarter during a speech repeatedly met with cheers and chants from a raucous crowd of 20,000 supporters.

“Together, we stared down a corrupt and broken political establishment, and we restored government of, by, and for the people,” Trump said to the crowd gathered at the Amway Center.

After thanking Vice President Mike Pence, Karen Pence, and First Lady Melania for introducing him as well as the people supporting his political movement, Trump touted the economy as “the envy of the world, perhaps the greatest economy we’ve had in the history of our country” and offered its continuation should he remain in the White House.

“And as long as you keep this team in place, we have a tremendous way to go. Our future has never ever looked brighter or sharper,” he said. “The fact is, the American Dream is back, it’s bigger and better, and stronger than ever before.”

Trump then set his sights on the opposition, delivering a flurry of attacks that included the “Fake News” media, the “Swamp” in Washington DC, the Mueller report, “crooked” Hillary Clinton, President Barack Obama, and “radical” Democrats.

“The Democratic Party has become more radical and more dangerous and more unhinged than at any point in the history of our country,” he added, telling the crowd the Democrats are at fault for drugs, gangs, crime, and illegal immigration.

“They went after my family, my business, my finances, my employees, almost everyone I’ve known and worked with but they are really going after you,” he said referring to the Mueller investigation and Democrats seeking his tax returns. “That’s what it is all about. It’s not about us but you. They tried to erase your vote, erase your legacy of the greatest campaign and the greatest election probably in the history of our country.”

In addition to finishing the US-Mexico border wall, the president then set some new goals should he win a second term, which included sending Americans to Mars, curing cancer, and “eradicating” AIDS.

Trump concluded his hour-plus speech by reinforcing his position on the Iran nuclear deal, the trade war with China as well as protecting the Second Amendment. He also called on Congress to end “extreme late-term” abortions, telling the crowd the “Democrats have even opposed measures to prevent the execution of children after birth” despite it already being against the law to kill babies that have been born.

@realDonaldTrump has raised a record breaking $24.8M in less than 24 hours for his re-election. The enthusiasm across the country for this President is unmatched and unlike anything we’ve ever seen! #trump2020 #KeepAmericaGreat

By comparison, the figure is more than the combined total the top five polling Democrats raised 24 hours after making announcing their 2020 run.

Joe Biden brought in $6.3 million — the most day one cash among Democrats seeking the party’s nomination. Fundraising in the Democratic Party will remain lower individually due to the number of candidates running in the primaries, whereas the donors for the Republican Party know Trump will be their nominee.

Before the rally in Orlando, the independent Quinnipiac University poll released Tuesday, showing Biden currently leads Trump 50% to 41% in a head-to-head matchup in the general election.

Bernie Sanders also beats Trump with a 48% to 42% edge in the latest poll, and the remaining Democratic frontrunners have narrow leads over the president, but falling within the margin of error.

And earlier this week, a Fox News Poll gave Biden a 10% lead while Sanders had a 9% advantage over Trump in the hypothetical 2020 Presidential Election matchup.

Trump would later claim that the Fox News Polls are “always bad for me” before calling them “Fake News.”

.@FoxNews Polls are always bad for me. They were against Crooked Hillary also. Something weird going on at Fox. Our polls show us leading in all 17 Swing States. For the record, I didn’t spend 30 hours with @abcnews, but rather a tiny fraction of that. More Fake News @BretBaier

It’s no secret that Trump won’t be a longshot this time around, and as the incumbent, he will likely not have to face opposition from his own party since the Republican National Committee has stated they would not debates during the primaries.

This makes Trump’s path to the president much easier compared to any of the Democrats. Because the field of Dems is so large, they’ll need the political equivalent of battle royale in Fortnite to determine the “last person standing.”

Trump has been the favorite to win the 2020 Presidential Election since the start of the year and has seen his odds gradually get better as we arrive at the midway point of 2019. Oddsmakers currently have him listed at +100 which gives him exactly a 50% chance to win reelection next fall.

Below you can find the current odds for the 2020 candidates at BetOnline.