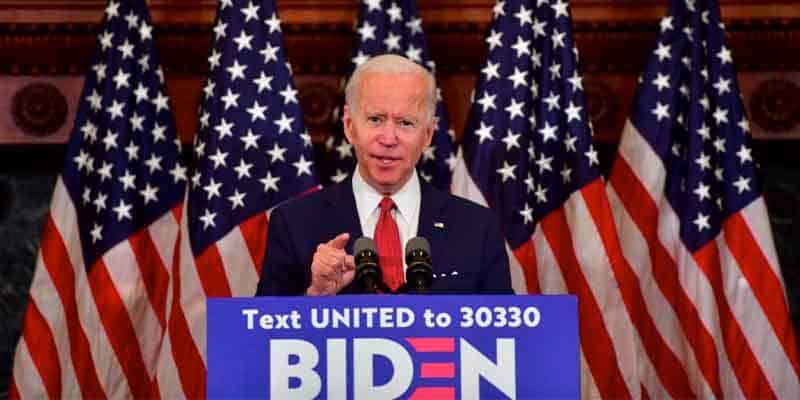 Just when bettors were about to throw in the towel on Joe Biden’s chances of becoming the Presidential election odds favorite, the lines at some sportsbooks shifted drastically in his favor.

Major online political sportsbook BetOnline now has Biden as a heavy favorite. Just 48 hours ago, many political betting experts were wondering if Biden could make up ground on Trump, and now they have their answer.

On Monday, President Trump was in the lead with -135 odds, a full 45 points ahead of Biden who sat at +110. This represents a large margin in the world of election odds and would be a blowout victory if those odds translated to ballot box tallies.

Election odds have tightened at other major sportsbooks as well, but they still feature Trump with a narrow edge over Joe Biden. So, what happened?

Biden was in Philadelphia on Tuesday and gave a passionate speech addressing the protests that are going on across America following the death of George Floyd at the hands of the Minneapolis, MN, Police Department.

While offering words in support of efforts to reform police department tactics in the USA and rectify procedures that include unjust racial profiling, he also leveled harsh criticism in regard to Trump’s response to the protests.

”Look, I look at the presidency as a very big job and nobody will get it right every time, and I won’t either, but I promise you this. I won’t traffic in fear and division. I won’t fan the flames of hate.”

Biden’s message of acceptance and love has made this 2020 Presidential race competitive once again, so what can he do to continue the momentum now?

Joe Biden’s Vice-Presidential selection will move the political needle. So who will be ridin’ with Biden on his quest for the highest office in the land?

According to CNN, Biden’s Vice-Presidential selection will be an African American woman, and oddsmakers agree. US Senator Kamala Harris is currently the VP odds leader, with FL Congresswoman Val Demings a close second and closing. Two days ago, Demings was at +500 at Bovada, but she’s trending at +375 today.

Our team is not so sure a woman of color will make a huge difference in the polls or the betting odds for Biden, as his support from African American voters is already extremely high.

That said, Senator Harris is a logical choice because she is now heading up the effort to initiate police tactical reform across the board, though her own past of discretionary racial profiling in prosecuting minorities for non-violent crimes (and laughing about it on camera) could come back to bite her. It did in the second Democratic debates, and it could again.

Representative Val Demings is the former police chief of the Orlando, FL, P.D. Having her on board with police brutality dominating the headlines will make a major splash on the US political landscape.

Another major factor in why Biden might do well to select Demings is that she represents the state of Florida, which was won by Trump in 2016 by the narrowest of margins (well under two percent of the vote). Perhaps Rep. Demings could be just what Biden’s campaign needs to turn the Sunshine State blue in 2020 and take its massive haul of 29 electoral votes.

When the VP announcement will come is anyone’s guess, but the importance of Biden’s decision is vital, as it could make or break his campaign.