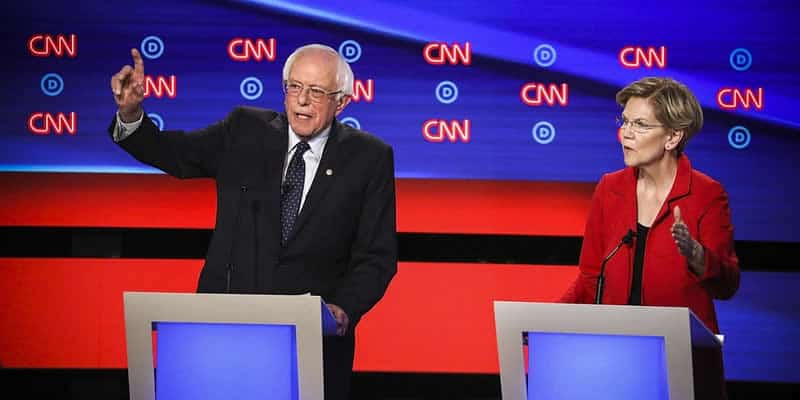 After the first night of the Democratic debates in Detroit, a mix of low pollers and big names made headlines.

Sen. Bernie Sanders and Sen. Elizabeth Warren stood behind their far-left ideas despite heavy criticism from moderate Democrats while Mayor Pete Buttigieg called for a middle ground amongst the party members on the issue.

Self-help author Marianne Williamson became the most searched candidate on Google due to her views on race relations and “dark psychic forces” within the government.

The most controversial stance shared by Sanders and Warren is Medicare for all, which would create a new medicare framework that would eliminate private insurance in favor of a government-run program that would cover the medical needs of all Americans.

During the debate, one of the most outspoken critics of the plan was former Rep. John Delaney, who said that eliminating private insurance would be “political suicide.”

John Delaney should admit defeat and wait for a new topic. #DemDebate

Sanders was not the only Democrat to counter Delaney’s jabs. After calling her ideas “impossible promises,” Warren delivered one of the night’s best lines.

“I don’t understand why anybody goes to all the trouble of running for president of the United States just to talk about what we really can’t do and shouldn’t fight for,” she said.

Throughout the countless healthcare disagreements, Buttigieg offered a solution: “Let’s just stand up for the right policy and go out there and defend it.”

Buttigieg said that Republicans will call Democrats “crazy socialists” regardless of their stance on healthcare, whether it be leftist or centric, so there’s no reason to worry about the constant criticism.

Another candidate making news from the first night is Williamson. The author became the most searched candidate during the debate, beating out high-profile Democrats like Sanders and Warren, according to Google Trend’s Twitter.

Williamson previously drew praise for her endorsement of financial reparations for descendants of enslaved Africans, proposing $100 billion over 10 years.

Last night, she received considered applause when discussing the Flint, Michigan water crisis, saying it is “just the tip of the iceberg.”

However, her most memorable moment during the debate came from her belief that President Donald Trump is fostering a dark force in America.

“The racism, the bigotry and the entire conversation that we’re having here tonight, if you think any of this wonkiness is going to deal with this dark psychic force of the collectivized hatred that this president is bringing up in this country, then I’m afraid that the Democrats are going to see some very dark days.”

At the moment, the presidential elections odds are not available, but we will update readers as soon as they are up.