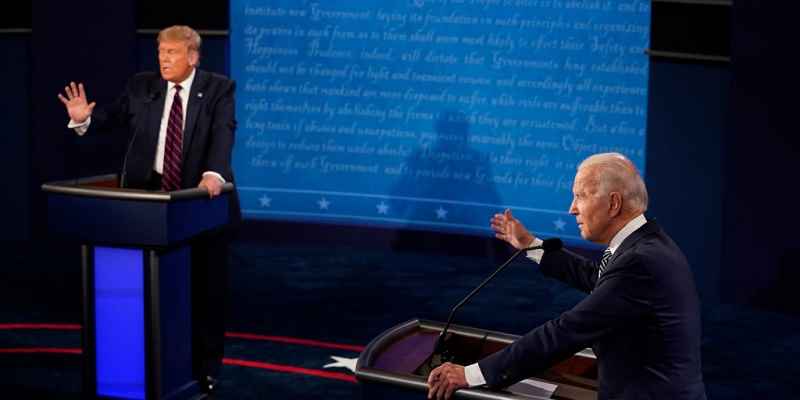 Americans have been anticipating the first Presidential debate for weeks, and last night, the two 2020 candidates for POTUS shared the stage and cleared up any mysteries involving what audiences can expect from the content of their verbal exchanges.

Calling them verbal exchanges is a bit of a reach. In all actuality, they were more like vocabulary-laden insult blankets, meant to interrupt, counter, and suffocate the other debater’s comments.

Joe Biden seemed ready for a standard, head-to-head, debate, but when President Trump continued to interject his own brand of commentary throughout Biden’s remarks, the contest went off the rails and became an ugly affair for the remainder of the broadcast.

From our perspective, Trump utilized bully tactics to constantly upset the rhythm that Biden was trying to establish, often with remarks that had very little relevance to the subject at hand.

Trump’s debate strategies only served to muddy the waters and to infuriate viewers who would actually like to hear answers to the questions being proposed.

Biden made attempts to stay on course early on in the proceedings, but he must also be chided for taking the bait that Trump laid for him.

When Trump challenged Biden on his son’s dealings while in the Ukraine, Joe responded in anger, vehemently defending his son. This is a noble response that any loving father would be inclined to utter, but in the Presidential debate arena, Biden made a fatal mistake.

Biden had the opportunity to quickly defend his son, who was basically exonerated by the US Senate, and then move on to a damning critique of Trump’s children and their oftentimes controversial behavior. The subject of Trump’s family is a treasure chest without a bottom, and Biden ignored it in favor of vengeful rage. The Donald won that round.

Where Trump made a major slipup is when moderator Chris Wallace asked the President to denounce white supremacist groups and militias, to which he responded, “Stand down, and stand by.”

Had the President ended the statement with “stand down,” and moved on, it had the potential to be an enduring comment that could be referred to in a positive light moving forth.

Instead, his follow up, insinuating that these hate groups should “stand by,” suggests that he is going to send up some kind of bat signal to let them know when it’s time to pop off again. These are truly strange times that we are living in.

Former US Senator from Pennsylvania, Rick Santorum, feels that asking Trump to denounce white supremacy groups is not fair because they represent a large chunk of his voter base, according to a report from Business Insider.

If you are looking for a silver lining, at least politicians are wearing their hearts on their sleeves these days.

Largely because of missed opportunities by Biden, we are declaring the first debate a tie. Joe Biden has been hesitant to agree to debate terms thus far, and after the way the first contest went down, any further events may be in doubt.

Political betting sites have unveiled odds for whether or not Biden will agree to join Trump on the stage again for a second or third debate.

Will Joe Biden Participate In The Second Debate?

Will Joe Biden Participate In The Third Debate?

The Presidential debate odds suggest that the second and third debates will almost certainly occur, but there is no real money to be made by betting on them to happen.

Alternatively, large amounts of cash can be earned by wagering on Biden to negate the second or third debate to the tune of 7x to 9x of the amount risked.

The second debate is scheduled for Thursday, October 15th in Miami, Florida, so get your bets in now to ensure the best payout.