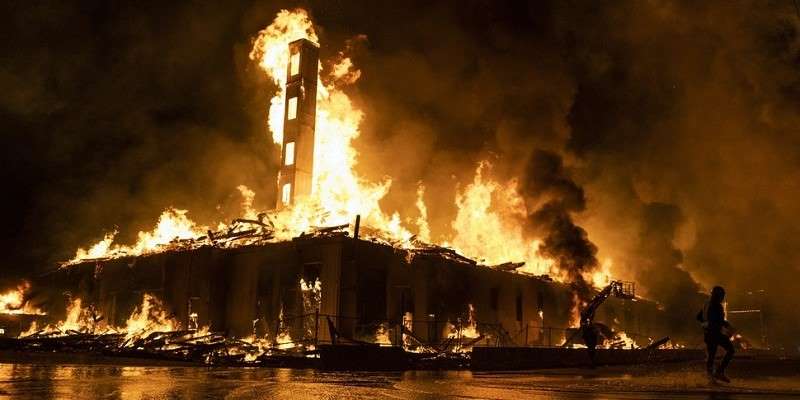 As expected – on way or another – the upcoming November elections are dealing with another wildcard in terms of what bettors can and should expect.

On the heels of the coronavirus pandemic calming down and America starting to open up again, the events in Minnesota – starting with Monday evening’s shocking killing of George Floyd at the hands of Minneapolis law enforcement and the summary riots throughout the country – could have significant reverberations not only for the general election, but also for statewide elections and local races.

While the officers involved in the Floyd case have all been fired, they have yet to be arrested or charged, though both of those outcomes seem inevitable. However, that will not stop the narrative of racial animus from leapfrogging COVID-19 on the national stage.

And that means that politicians – and bettors – will now have to pivot to see how public sentiment might affect the US election odds and political props on offer.

While you shouldn’t expect any betting lines for this case, as offshore sportsbooks are largely tasteful in the odds they offer to the public, you should certainly keep an eye out for how these new developments will move the numbers for existing lines.

Minnesota is already a major battleground state in the 2020 Presidential election, as Trump lost there by under two percent of the vote in 2016.

However, it is unclear if this outrage will move the lines in his favor or in the favor of Joe Biden, the presumptive Democratic nominee.

Issues of policing are difficult to predict electorally.

While sheriffs are elected and sink or swim politically on the actions of their deputies, police are hired by local governments, though this distinction is not fully understood by the electorate.

Minneapolis, for example, is in Hennepin County, which is roughly 63% Democratic by population and has voted for the Democratic candidate in the last five Presidential elections.

The political makeup of Hennepin county is largely Democratic as well.

Jacob Frey, the mayor of Minneapolis, is a Democrat, and the Minneapolis City Council is comprised of 12 Democrats and one Green Party member. There are no Republicans on the Council. Further, MN’s 2nd District and 5th District cover the Twin Cities, and both districts’ US representatives – including the popular Ilhan Omar – are Democrats and call Minneapolis residents their constituents.

In short, there is zero GOP representation in Minneapolis, and the police involved in Floyd’s death are all employed by Democrats.

This is not a judgment on Democrats, Republicans, policing, or anything else. Rather, this is pointed out purely so bettors can understand the political makeup of the area and how the events of Monday evening – and the resulting public reaction – may impact local, state, and federal elections.

To be sure, accusations immediately started flying that the police involved were Republicans and that the primary officer involved – Derek Chauvin – was a Trump-supporting white nationalist, as you can see in this “verified” tweet from entertainer Ice Cube below:

The F.B.I. knows exactly who the racist are in each police department and still let them keep there jobs until something like this happens. Stop sitting on critical information. Weed them out and get them out…NOW! #jonnycomelatelyagain https://t.co/X7ny0wsRQX

Of course, Chauvin is not the same man as that pictured in the parodied MAGA hat. That individual is Jonathan Lee Riches, a well-known federal felon with a penchant for committing wire fraud and filing frivolous lawsuits.

Nevertheless, this kind of “fake news” is designed to align the controversy with Trump, and Twitter has still not “fact checked” the viral assertion. As a result, it’s easy for bettors to see how such can be damaging to Donald Trump’s reelection odds.

For his part, Trump has called for a DOJ investigation into Floyd’s death. Whether or not that will be enough to satisfy voters and bettors remains to be seen.

Naturally, another prominent politician, Sen. Amy Klobuchar – who has recently made gains on Kamala Harris (CA) atop the VP odds boards at BetOnline, closing the gap to just 50 points – could be affected by this scandal, as well.

Klobuchar represents Minnesota in the US Senate, and her chances to be Biden’s female Vice President pick may be hurt by these developments.

Indeed, BetOnline has taken down its VP futures for the time being, no doubt to reassess the appropriate line for the Senator. For her part, Klobuchar has also called for the prosecution of the officers involved in Floyd’s killing, though it is too early to tell where the fallout will leave her.

Ultimately, bettors will have to decide who – or what – is responsible for Floyd’s apparent murder.

There is a race within the mainstream media to pin the blame on Republicans, despite the lack of Republican representation in the area where the crime occurred. The media wishes to align Chauvin and his compatriots with the MAGA base and systemic racism.

Frankly, voters may not attribute causation to the direct local arbiters of that system, especially when an issue has rapidly taken on national prominence. And that can make betting less logical and more difficult.

At Bovada, the electoral odds for Minnesota have seen a small drop over the last day after holding steady for more than a month. Before the Floyd event, the sportsbook was giving Minnesota -330 odds to vote for the Democratic candidate in 2020, while Republicans had +235 odds to win the state. Today, those odds stand as follows:

The change may not seem noteworthy in a vacuum, but it indicates that bettors – in the last 24 hours – have moved the line 15 points in favor of the GOP.

The odds for Senate control in 2020 have also moved more in favor of Republicans, and by a larger margin.

Before Floyd’s killing, Bovada favored the GOP at -145 odds, while the Democrats were +110 underdogs to retake the upper chamber. Today, those lines have changed substantially:

If you’re interested in wagering on these lines, the next few days will be of critical importance, particularly if you think Trump has a chance to take the Gopher State. In terms of payout, right now might be the best odds you’ll see for the GOP to win MN and for Democrats to take the US Senate.

Ultimately, news like this is a double-edged sword for political bettors, and it illustrates the difficulties in navigating the lines and applying the critical – and not emotional – thinking necessary to win when placing any wager in this market.

It isn’t easy to look beyond such things in a pragmatic way, but it’s one of the challenges to be aware of when you venture into election betting.