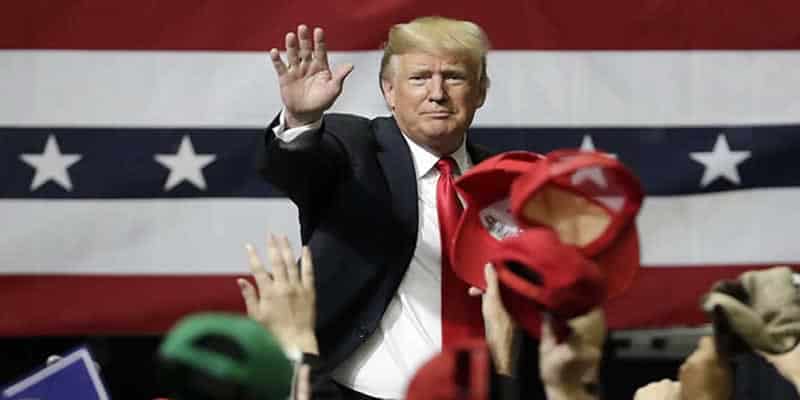 Trump may need a life raft to survive the impending Blue Wave on Tuesday.

Most polling forecasters and oddsmakers are predicting the Democrats to take full control of the U.S. House of Representatives, getting an 87.5% chance from FiveThirtyEight of the Dems becoming the House majority following the 2018 Midterm Elections.

In addition, RealClearPolitics currently has the Democrats picking up 8 seats for governor, bringing the margin to only +2 for Republicans.

But it’s not all bad news from President Donald Trump.

The Republicans still have an 83.4% chance of maintaining control the U.S. Senate and most polling forecasters even expect the GOP to gain an extra seat or two.

However, the GOP losing control of the house would put the odds of President Trump being re-elected in serious doubt due to the House being able to start the impeachment process.

It is unknown whether the process would help or hurt a Trump re-election, since if the newly-elected Democratic House attempts to impeach Trump without any substantial or tangible evidence to justify impeachment, then it could backfire for the left and increase Trumps’ odds of winning in 2020.

Currently, oddsmakers at Bovada believe that Trump will likely survive impeachment, but he is not favored to win in 2020.

Even though is the favorite out of the possible candidates running for president in 2020, the betting line of “Which party will win the 2020 US Presidential Election?” being favored by the Democrats indicates he already has the odds stacked against him.

And this is before tomorrow’s midterms, which could swing the (-125), or 52%, against Trump being re-elected as president should he not be able to pass any legislation regarding a wall or immigration.

A similar situation happened to President Obama, and he was left with using executive orders to help carry out his agenda due to both the House and the Senate not willing to work with him. This will likely happen to Trump in his first, and perhaps only term.

On the other hand, if there’s one thing we all learned in 2016, it’s that it’s going to be hard to count Trump out since – if you listened to all the polling forecasters before the general election – he was never supposed to get into office in the first place, and the rest became history.