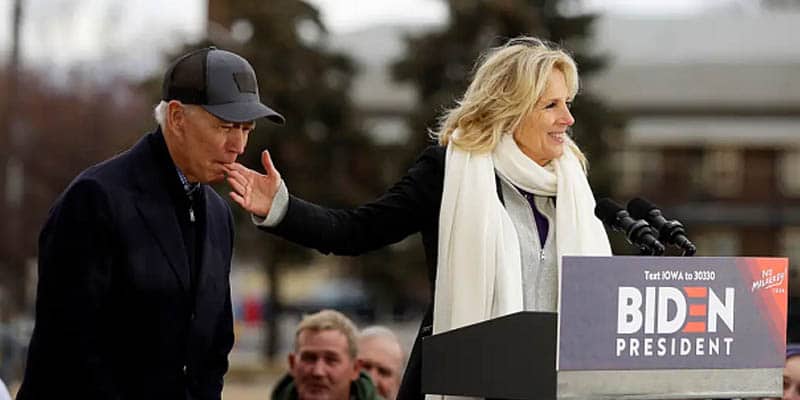 Former Vice President Joe Biden is currently running for President in next year’s election. Not only is he doing well, but Barack Obama’s right-hand man leads the Democratic Party in many major polls.

With numbers that include a +16 point spread in The Hill/HarrisX poll, it would imply that Biden is doing great on the campaign circuit.

However, like clockwork, the White House hopeful continues to exhibit peculiar actions, utter incoherent phrases, and demonstrate behavior that would normally hurt other candidates in the race.

His three latest oddities range from weird to damning.

Nibbling on his wife’s finger

The first goof, when taken out of context, seems pretty strange. But overall, the incident is rather pedestrian.

During a campaign stop in Iowa on Saturday, Biden’s wife, Jill, gave on speech with her husband on stage.

Waving her arms, Jill nearly hit Biden in the face. Continuing with the playful nature of the situation, Biden decided to nibble on his wife’s finger.

Again, nothing too out of the ordinary. However, coupled with the many allegations of sexual misconduct against Biden and the growing idea that he is losing his touch mentally, the moment just feels off.

The other half of the “Corn Pop” speech

Back in September, a 2017 video of Biden went viral. During a speech, the former VP mentioned Corn Pop, a “bad dude” that was ready to hurt Biden. After apologizing for calling Corn Pop Esther Williams, the gang leader and his crew forgave Biden.

The most peculiar part of the story, however, was not revealed until recently. During the same speech, Biden tells stories about children rubbing his leg hair, how he loves it when they jump on his lap, and men he used to work with all in a jumbled mess of words.

Again, given his sexual misconduct allegations, the parts about kids feels inappropriate.

During a town hall in Greenwood, South Carolina two weeks ago, Biden was interrupted by an anti-deportation protester. During the exchange, Biden told the protester to “you should vote for Trump” and turned his back on the man.

This could be the worst thing Biden has done so far for multiple reasons. First, he’s telling voters to support another candidate. Secondly, Biden is refusing to address one of the most prominent issues in America right now.

Despite all this, Uncle Joe is still the most likely candidate for the Democratic nomination. Leading the Democrats in the political betting odds, Biden has +280 chances of earning the party’s nomination.