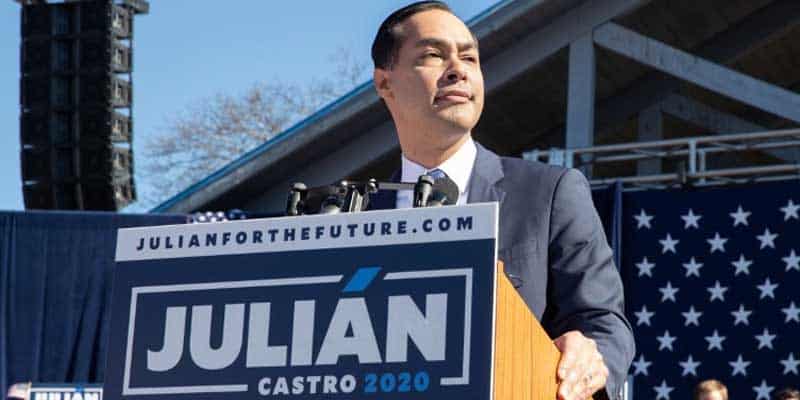 Number ten is in.

Former Secretary of Housing and Urban Development Julián Castro has qualified for the third Democratic debate in Houston.

Castro, who is also the former Mayor of San Antonio, is the second Texan to make the debate in their home state after former Rep. Beto O’Rourke previously qualified in July.

Earlier this morning, Castro retweeted a CNN Politics link claiming that he qualified for the September Democratic debate.

Adding his gratitude: “Thank you to our growing number of supporters across the country!”.

Thank you to our growing number of supporters across the country! https://t.co/1mBNTQs7d8

Qualifying for the third debate required candidates to have 130,000 unique donors plus 2% in four separate polls conducted between June 28 and August 28.

Although Castro only has a small chance of winning the Democratic nomination, +5000 odds according to Bovada, making the third debate can be a boost to his chances. Castro shares the same odds, which equates to a 1.96% chance of winning, with fellow Texan O’Rourke.

Of the other eight qualifiers, only Sen. Amy Klobuchar has less of a chance to earn the nomination than the Texans:

Castro’s fourth qualifying poll was a CNN poll conducted by SSRS that was released today.

The same poll also revealed that Rep. Tulsi Gabbard (+2500) received 2% support, her second poll during the qualification window. Gabbard is well over the donor requirement, notching over 159,000 by August 11, according to her official Twitter account.

Billionaire Tom Steyer (+10000) has also met the donor requirement and is only one poll away from qualifying for the debate despite only starting his presidential campaign in July.

A full list of Democratic hopefuls and their odds are below for comparison. If Gabbard and Steyer enter the debate, the 12 candidates on stage will be the same 12 that hold the best odds to win the Democratic nomination.