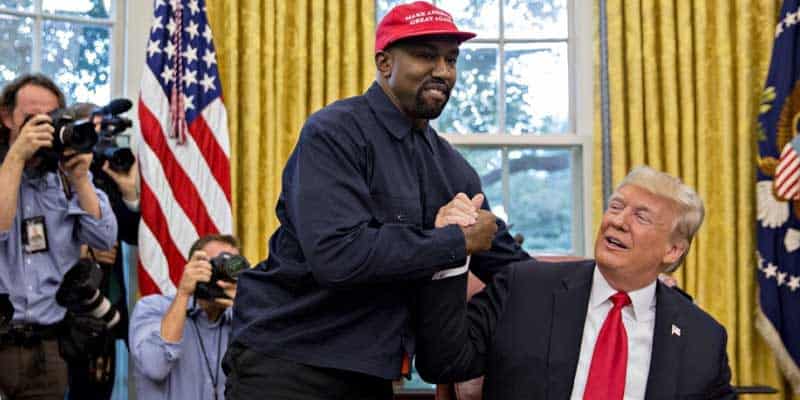 “What I’m saying is, when y’all read the headlines, ‘Kanye’s crazy,’ this and that, this and that, it’s like one in three African Americans are in jail, and all of the celebrities are in jail also because they can’t say nothing! They’ve got no opinion! They’re so scared!”

Does he have your vote?

West has flirted with the idea of jumping into the race in the past. However, he now appears to be putting together a plan to follow in the footsteps of 2020 odds-on favorite President Donald Trump, whom he publicly supports and even met at the White House last year while donning a “Make America Great Again” hat.

And he may change his name before launching his 2024 campaign.

The rap artist recently released his latest album “Jesus Is King”—#1 on Billboard and every song has made the Billboard Hot 100—and said he’s changing his name to “Christian Genius Billionaire Kanye West” because Forbes would label him as a billionaire.

While it’s too early for the political betting sites to weigh West’s chances of winning in 2024, the odds for the 2020 Presidential Election may give us a glimpse at how likely we’ll see Christian Genius Billionaire Kanye West in the White House five years from now.

Needless to say, those are extremely longshot odds. When converted to an implied probability, the oddsmakers are giving West approximately a 0.11% chance of winning in 2020.

It’s worth noting that if he is serious about running five years from now, then his chances will drastically improve once the odds are released for the 2024 Election.

Don’t believe me? Consider this: West and his wife, Kim Kardashian West, have a combined net worth of $510 million and have hundreds of millions of followers across various social media platforms.

Very few couples or individuals have that kind of reach. Since they already have a huge social media presence, the West 2024 campaign would only need to invest in a ground game operation and have a message that connects with Americans.

You can doubt West’s chances in 2024 if you want, but just a reminder:

People laughed at Trump when he announced his campaign, and the people who bet on the businessman’s then-longshot odds ended up laughing all the way to the bank after he won the 2016 Presidential Election.