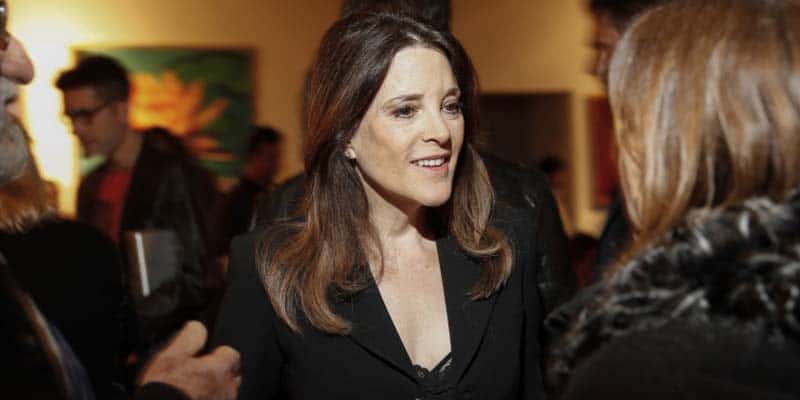 Marianne Williamson is now a Top 10 favorite to win the 2020 Democratic nomination. But who is she?

When Marianne Williamson first announced her run for the United States presidency in January, most oddsmakers at political betting sites didn’t bother giving the self-help author a chance to win the 2020 Democratic nomination.

After the debate in June, the oddsmakers took notice, and before the second Democratic primary debate, they gave her +15000 odds ($100 bet wins $15,000) to become the party’s nominee.

In other words: A longshot, to say the least.

Today, however, BetOnline gives her +5000 odds to win the Democratic nomination, placing her chances in the top 10 of all party candidates — even ahead of more household names such as Sen. Amy Klobuchar, former Housing Secretary Julián Castro, and Sen. Kirsten Gillibrand.

With progressive views, interesting vocabulary usage, and unique statements on how to solve America’s growing problems, one must ask:

Who exactly is Marianne Williamson?

She was born and raised in Houston, Texas in a Conservative Jewish household. After high school, Williamson studied theater and philosophy at Pomona College for two years before going to New York City in 1973 to become a cabaret singer.

By the early 1980s, Williamson was in Los Angeles lecturing on A Course in Miracles by Helen Schucman. The book has influenced Williamson’s outlook and views, even claiming that because Course has “no holes,” consulting it can solve any problem.

Williamson published her first book, A Return to Love: Reflections on the Principles of A Course in Miracles in 1992. Oprah Winfrey bought 1,000 copies and even encouraged her fans to read the book because it gave her 157 miracles.

Prior to running for president, Williamson ran an unsuccessful campaign as an independent in 2014 to represent California’s 33rd congressional district in the United States House of Representatives.

Despite her loss in the representative race, Williamson is gaining steam on the presidential front. To many voters, the free thinker offers great ideas for the country. However, Williamson is no stranger to criticism and skepticism.

First, we’ll cover the stuff that’s been positively received by the Democrats.

Williamson has released a plan for reparations, a central point to her run, that will disperse $200-500 billion worth of payments to descendants of slaves for “economic and educational renewal.”

Williamson has also discussed her ideas to curb mass shootings and gun violence, calling for universal background checks, a ban on assault weapon sales, and allowing the Centers for Disease Control and Prevention to track gun ownership.

Other than policy, voters seem to be drawn to Williamson’s likeability and sincerity. Donald Trump Jr. even tweeted a positive message about Williamson, saying that she was “actually winning” the debate in July.

People are gonna think that I’m trolling but compared to what else is up on this stage I think Marianne Williamson is actually winning this thing. This is amazing. No question she seems to be drawing the biggest applause of the night.

Williamson’s casual demeanor and speech could be another reason voters are listening to her message. During the first debate in June, Williamson said she would call New Zealand Prime Minister, Jacinda Ardern, to tell her, “Girlfriend, you are so on,” regarding child safety in their respective countries.

Another phrase that has drawn people to Williamson, for better or for worse, was her mention of the “dark psychic force of the collectivized hatred that this president is bringing up in this country,” during the July debate.

But with praise comes condemnation. Williamson has received criticism on her statements related to vaccines, depression, and illness.

In June, Williamson called vaccines “draconian” and “Orwellian” at one of her events in New Hampshire.

“To me, it’s no different than the abortion debate The U.S. government doesn’t tell any citizen, in my book, what they have to do with their body or their child,” she said at the same event.

Trevor Noah, host of The Daily Show, allowed Williamson to clarify her remarks in an interview for the show.

“I’ve never said anything bad about vaccines. I am pro-vaccines,” she told Noah before she called herself “the least anti-science, the least anti-medicine person you’ll ever meet.”

Other medical statements of Williamson’s have been under harsh scrutiny. In her book, A Return to Love, Williamson claimed that sickness is “our own love that needs to be reclaimed. Williamson has also criticized the use of antidepressants and called the distinction between sadness and depression “artificial.”

Williamson has since apologized or recanted most of these statements via her Twitter or in interviews.

If voters really believe in Williamson’s message, they only have a short time left to keep her in the race. To qualify for the third debate in September, candidates must have 130,000 unique donors and receive 2% support in four polls by the August 28 deadline.

Unfortunately, Williamson has neither right now, leaving her future in the race as dark as the psychic forces in the White House.

But reaching the donor mark may not be out of the question. Williamson shared a tweet today claiming to only need 17,000 more donors before the deadline in three weeks.

A little over 17,000 more unique donors needed to make the August 28 deadline to get me into the third DNC debate. Please do everything you can to make it happen. Thank you! https://t.co/oEvlC2ZIiG

For a comparison of the Democratic candidates and their odds, a list is below. Of this list, only eight have qualified for the Houston debate next month: former VP Joe Biden, Sen. Elizabeth Warren, Sen. Kamala Harris, Sen. Bernie Sanders, South Bend Mayor Pete Buttigieg, former Rep. Beto O’Rourke, Sen. Cory Booker, and Sen. Amy Klobuchar.