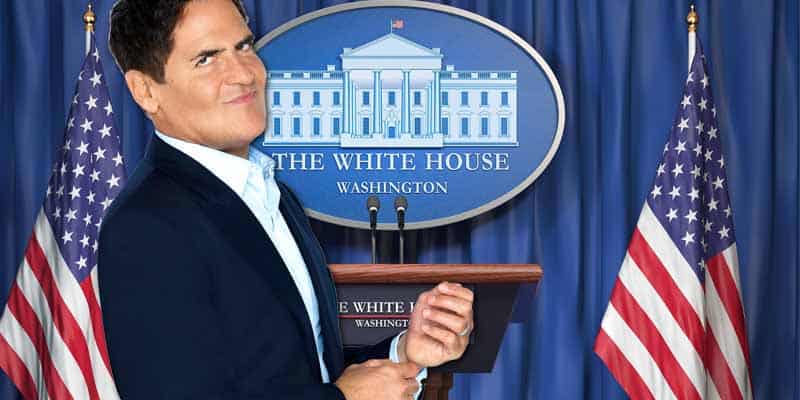 President Donald Trump could face another Cuban battle; a battle with Mark Cuban that is.

Although Cuban is not expected to enter the 2020 presidential race, the billionaire owner of the Dallas Mavericks has +500 odds of declaring himself a candidate, according to MyBookie. This is compared to -1000 odds of not entering the race.

Will Mark Cuban declare himself a candidate for the 2020 election?

In May, Cuban told CNBC that he was unsure about running for president, saying: “We’ll see what happens. It would take the perfect storm for me to do it… but I’m not projecting or predicting it right now.”

That statement alone gives the impression that Cuban will not run, but if the Shark Tank star does decide to seek election, he will do so on an independent bid.

This is a shift from his previous statement to Fox News in October 2017 claiming that he would run as a Republican.

“I think there’s a place for somebody who’s socially a centrist but I’m very fiscally conservative,” Cuban said.

His fiscal views can be attributed, at least in part, to his admiration of Ayn Rand’s literature. The Russian-American writer’s novel Fountainhead explores topics of objectivism and capitalism, and although Cuban says he doesn’t completely buy into her political philosophy, he does find capitalistic motivation through the book’s characters.

Despite never holding political office, Cuban has never been one to shy away from politics. In September 2015, Cuban claimed that he could beat Hillary Clinton and Trump.

“I get asked every day. It’s a fun idea to toss around. If I ran as a Dem, I know I could beat Hillary Clinton. And if it was me vs. Trump, I would crush him. No doubt about it.”

Later in October of the same year, Cuban said in a since-deleted tweet, “Maybe I’ll run for Speaker of the House.”

If Cuban does decide to run for president, he will join a couple of other notable billionaires in the race.

If Cuban joins the crowded field in the hunt for the presidency, he’ll join 26 other official candidates between the Democratic and Republicans.

To compare, here is a list of the candidates with the best odds to win the 2020 Presidential Election, via MyBookie.