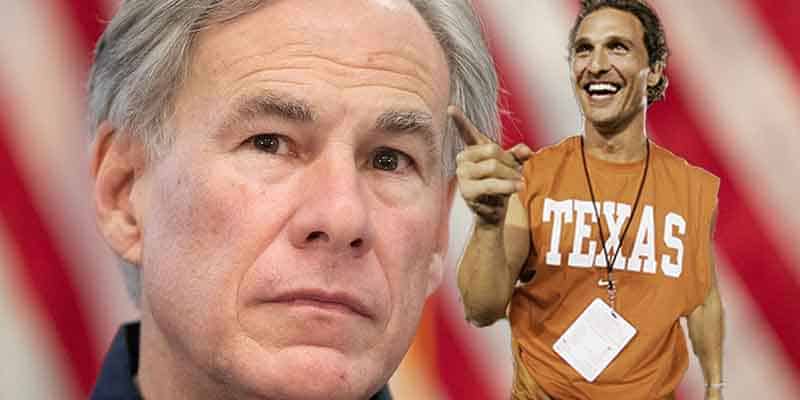 Movie star and Texas native Matthew McConaughey wears his adoration for his home state on his sleeve. Like him or hate him, Texans cannot deny his love for the Lone Star State.

For most, when it comes to Matthew McConaughey, politics is not the first thing people think of.

In regard to the current stance of Matthew McConaughey, political views are hard to come by. Many assume he aligns with the Republican Party, but that is largely due to most Texans falling under that affiliation.

On the other side of the coin, a majority of the “Hollywood elite” tend to lean hard left, but again, that crowd largely resides in California or inside other DNC strongholds.

The Gubernatorial odds for 2022 place McConaughey in the third overall position. While his odds may be unfavorable as of this writing, an announcement of Matthew McConaghey running for Governor of Texas would likely propel him above Beto O’Rourke.

With that in mind, gamblers should take advantage of these Texas election odds now while the payouts are likely at their max value for McConoughey.

A bet of $1 on a Matthew McConaughey Governor win in 2022 will net gamblers $6, so imagine if you wagered $1,000. The beauty of political betting is that gamblers do not need to agree with the leanings of the candidate just to earn some extra bankroll on their election victory.

Matthew McConaughey’s election odds also reveal a sizable 900 point gap between himself and incumbent Texas Governor Greg Abbott, which is by no means unsurmountable but must be considered carefully when placing an election bet.

“I think our country, state, needs to be aggressively centric now. It’s a daring place to go, it’s a radical move right now.”

Statements like the above seem to solidify McConaughey’s lack of a commitment to an established political party, and even point toward the potential for him to run as an independent candidate.

Poll numbers for McConaughey have been inconsistent, with some suggesting nearly half the state of Texas would vote for him with others implying he has a low probability of being a significant player.

“Trust me, I’m spending a good amount of time deliberating and really working my mind, heart, and spirit on the questions.”

PredictIt has granted Matthew McConaughey a 12% chance of winning the Texas Governorship in 2022, a 12% chance of becoming the DNC’s nominee, and an 8% shot of earning the Republican Party’s nomination.

Perhaps an independent run for McConaughey is in order, and while that typically spells doom for candidates nationwide, the “Dazed And Confused” star is already well-known, well-regarded, and has buckets of charisma to spare.

Beto O’Roarke and Greg Abbott do not agree on much, but neither of them has any interest in a Matthew McConaughey Texas Governor campaign. Chances are, they are both fans of the guy, and you better believe, they are not intrigued by facing off against McConaughey on the debate stage.

McConaughey’s odds aren’t that great right now, but they’ll be a whole lot cooler once he announces his run for office. Stay tuned.