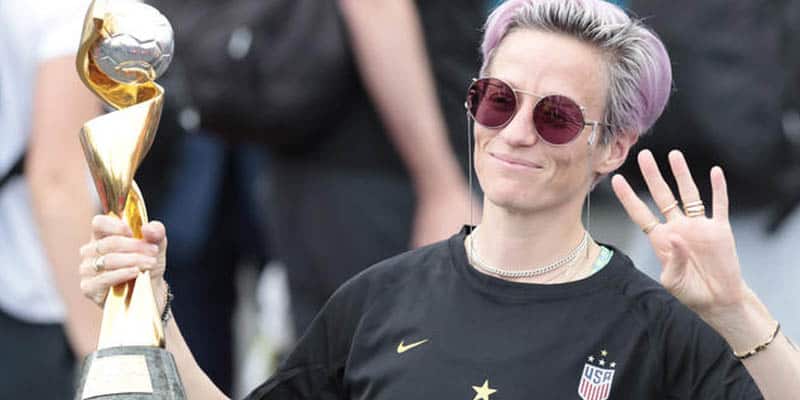 After winning the 2019 Women’s World Cup, the Golden Boot and Golden Ball winner made it clear she didn’t plan on running for president in 2020, following the team’s New York City victory parade.

“It’s my absolute honor to lead this team out on the field. There’s no other place that I’d rather be, even in the presidential race. I’m busy. I’m sorry.”

But that hasn’t stopped her from voicing her political and social opinions.

Off the field, Rapinoe is best known for her leading the women’s national team’s lawsuit against the United States Soccer Federation.

Rapinoe and the USWNT have always been vocal leaders in closing the gender pay gap. According to the suit, women could earn as little as 38% of a male soccer player, despite winning more games and bringing in more money.

If elected, Rapinoe would likely make gender equality a major part of her presidency.

She has the support for it, too. Following the US World Cup win in France, fans chanted “equal pay’ from the stands. Then again, after their parade, fans repeated the mantra.

Public Policy Polling even released numbers claiming Rapinoe would beat out Trump in an election. The poll gives Rapinoe 42% compared to Trump’s 41%.

Kevin Malone from The Office once said: “If anyone gives you 10000:1 odds on anything, you take that bet.”

But 30000:1 odds and a speech declaring she wouldn’t run should be enough to discourage any longshot bets.