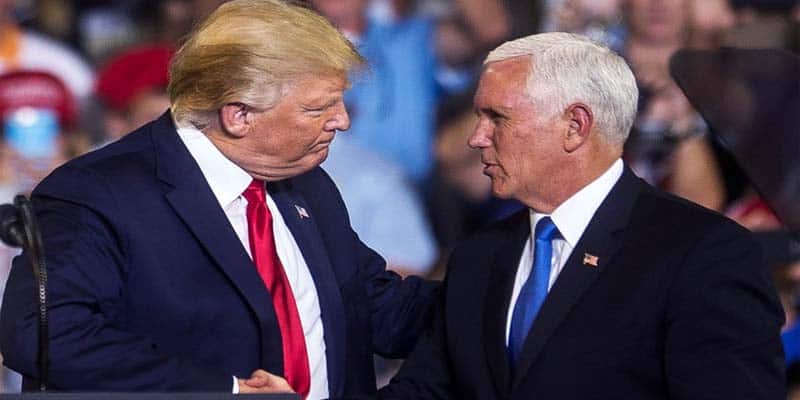 Is Pence A Good Bet With Trump’s Impeachment Odds Rising?

It’s been a rough week for President Donald Trump.

From the whistleblower complaint to hearings on Capitol Hill to an impeachment inquiry launched by House Democrats, it’s definitely been a week that Trump would like to forget.

Unfortunately, it doesn’t look like the allegations are going away anytime soon with Rep. Adam Schiff stating yesterday that the House Intelligence Committee will hold a hearing for the whistleblower “very soon.”

Depending on what’s said during the hearing could change the future of U.S. politics forever, but it’s very clear that the odds of Trump’s impeachment is becoming more likely with each passing day.

Trump has been here before, but this time it feels different from the Mueller Report, which saw his impeachment barely take a hit at the political betting sites.

And with a poll over the weekend showing that the majority of Americans now supporting impeachment, it’s easy to see why the public betting market is causing Trump’s chances of winning reelection to slip in tandem.

But there’s one bet to consider.

Should Trump be impeached—and removed from office (because he definitely isn’t going to resign)—then Vice President Mike Pence would become the 46th President of the United States.

Don’t get me wrong: Pence has longshot 2020 Presidential Election odds. But considering the size of the payout—and the extremely low amount needed to invest—it might be a worthwhile wager to at least ponder.

Currently, Pence’s 2020 odds sit at +5000, which means the oddsmakers at BetOnline are giving the VP a roughly 1.96% chance of winning the general election next year.

It’s extremely unlikely to happen—hence why Pence is a longshot—but Trump was also +5000 when he first announced his campaign back in 2015, and those bettors laughed all the way to the bank when he won the 2016 Election.

However, a lot would need to happen for a bet on Pence to payout.

First, the whistleblower would need to convince the Republican-controlled Senate that the allegations made against Trump are not only backed up by substantial evidence but are also deserving of impeachment (i.e., there was quid pro quo to get dirt on Joe).

Then, after the President is both impeached and removed from office, Pence would also need to be clear of charges, and with the possibility of Trump throwing his VP under the bus, this becomes another speed bumb to consider.

Finally, even if Pence is sworn in as the 46th President, he would still need to win the general election against the Democratic nominee. Going down in history as the first party to have a President impeached and removed from office would not be a good look for Republicans and even worse, would be a tough sell to voters in 2020 and for years to come.

The only historical comparison we can draw to the current situation is Richard Nixon resigning before likely being removed from office and then Gerald Ford taking his place.

Ford would go on to lose to Jimmy Carter in the 1976 general election, and many historians believe the primary reason for the Republicans’ defeat was because Ford pardoned Nixon from all potential Watergate charges—a decision that the American people, 53% to 38%, were strongly against at the time.

How the Trump whistleblower saga will play out remains to be seen, but even with the longshot odds, placing a bet on Pence might be worthwhile—but at the very least, it should be a bet you consider.