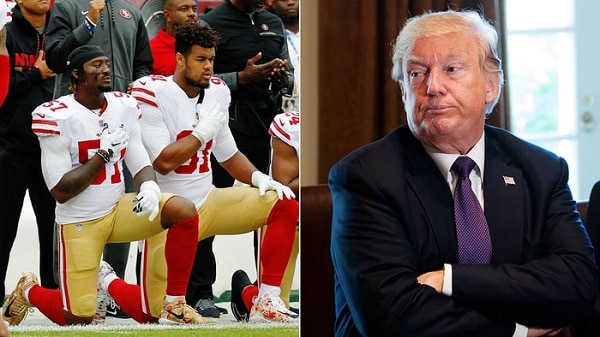 When the NFL owners apparently unanimously voted that players should be fined for kneeling, it made headlines. The league made headlines again when it was uncovered that there was never a vote, just a poll that held no official ruling. Now, the NFL is in hot water yet again after several owners’ dispositions in the Colin Kaepernick case attach President Donald Trump to the policy change decision.

Kaepernick was the start of the kneeling during the National Anthem movement and he has allegedy paid the price for it. The ex-player hasn’t been signed since opting out of his contract with the San Franciso 49ers. He claims that NFL owners colluded to not signing him as punishment for inciting these protests. The news about President Trump’s involvement isn’t groundbreaking in the sense that it proves all owners colluded, but it could single out a couple of NFL owners.

President Trump has been vehemently opposed to the National Anthem protests for months. At a political rally in Alabama, Trump stated that players who kneel during the anthem shouldn’t be in the league. He also said they perhaps shouldn’t even be in the country. Shortly following this rally, Trump had a phone conversation with Dallas Cowboys owner Jerry Jones. In the conversation, Trump stated that the NFL couldn’t win this issue and that it was a “strong issue” for him. Trump claimed the protests were more anti-military than anything, which led many Americans to denounce the NFL. This was proven by the declining viewership and loss of sponsorship revenue (which was accredited to the protests). Trump went on to say that this issue “lifts” him, suggesting he has more to gain from the NFL being opposed to the kneeling versus them supporting it.

Miami Dolphins owner Stephen Ross stated that Jones relayed this conversation to the other owners and that it “changed the dialogue.” No owners would want to go against the President of the United States, especially when he was running an effective smear campaign against the NFL. Ross stated in another interview that all Dolphins players would stand because he felt the protests took on a more anti-military stance. This showcases the effect of Trump’s influence and does not bode well for the league.

Government officials cannot legally tamper with private corporations. However, it seems President Trump did just that with this phone call to Jerry Jones. The NFL may have to go back on this rule considering the amount of backlash that will come from this news. As far as Kaepernick’s case goes, this only helps their cause. It shows the NFL owners were scared of the protests and willing to back a political agenda in order to help themselves. Keep an eye on the after effects of this as the league will be forced into further action.