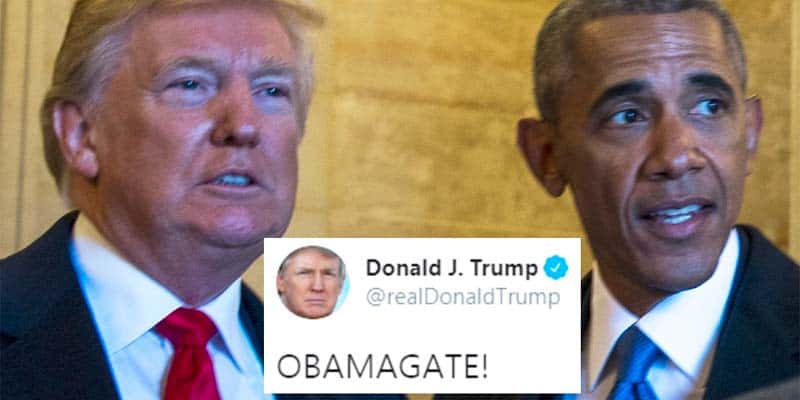 Obamagate Odds: Will Trump Win His Big Bet On Reelection?

“Obamagate” — a winning bet for President Donald Trump or a conspiracy that will allow Joe Biden to go on the attack?

While recent developments over how the FBI handled Michael Flynn’s prosecution deserve further scrutiny, claiming this is “The biggest political crime in American history, by far!” is quite a stretch.

Sportsbooks haven’t seen any significant spikes in bets placed since the controversy began on Mother’s Day. According to the latest odds to win the 2020 US Presidential Election, Donald Trump (-120) remains favored over Joe Biden (+130) to surpass the 270 electoral votes threshold on November 3.

May 13 — Odds courtesy of Bovada

“Obamagate” should sound fishy from the outset. After all, the now-viral trend uses the suffix “gate” in reference to the Watergate scandal that led to the resignation of President Richard Nixon.

Apart from the fact that the play on “gate” doesn’t even make sense because President Barack Obama is no longer in office, there is no evidence directly linking Trump’s predecessor to the damning charges made recently by his administration and supporters.

President Trump claims the Obama administration and then-FBI Director Jim Comey targeted Michael Flynn, retired general and his former national security adviser, in an attempt to sabotage his presidency before being sworn into office.

An email on Trump’s Inauguration Day from Susan Rice, Flynn’s predecessor, has also raised questions about whether the Obama administration attempted to upend the newly elected Commander-in-Chief: “The President asked Comey to inform him if anything changes in the next few weeks that should affect how we share classified information with the incoming team. Comey said he would.”

Democrats have countered with how the “Trump-Russia collusion” probe began at the end of Obama’s second term, the investigation into Flynn was then handed over to deputy attorney general Rod Rosenstein — Trump’s own appointee.

Supporters of the sitting President in past weeks have pointed to newly disclosed FBI documents that most notably include a handwritten note from the then-counterintelligence director on how they should question Flynn: “What’s our goal? Truth/Admission or to get him to lie, so we can prosecute him or get him fired?”

Flynn pleaded guilty to Special Counsel Robert Mueller’s charge of making false statements to investigators. Flynn now says he did not lie, and Attorney General William Barr has instructed the DOJ to dismiss the case.

US District Judge Emmet G. Sullivan has since delayed the DOJ’s dismal requests, and he said he would allow outside parties to argue the case before ruling whether to drop all charges against Flynn.

After Yahoo News released audio of a private conversation between Obama and ex-staffers about why he believes dropping charges against Flynn means the “rule of law is at risk,” Trump and his surrogates seized the opportunity to get #Obamagate trending on Twitter and social media.

Joe Biden, the underdog Democratic nominee, was questioned by ABC’s George Stephanopoulos and arguably didn’t do his former boss any favors by stumbling when asked whether he was involved in the conversation between Obama and Comey.

“I know nothing about those moves to investigate Michael Flynn,” Biden initially said, adding that it’s Trump’s way of diverting attention from his response to the coronavirus pandemic. When pressed by the GMA host, Obama’s former VP added, “I was aware that there was—that they asked for an investigation, but that’s all I know about it, and I don’t think anything else …”

More details may emerge ahead of Trump’s favored reelection bid, but like with “Russian collusion” and later with the Ukraine phone call that led to impeachment from House Democrats — Republicans of all people should know that tangible evidence is needed before going “all-in” on any political strategy against the opposition.

Currently, nothing proves Obama and Comey tried to “destroy” Trump before he stepped foot in the White House. Although the Logan Act has never been enforced, it does appear Flynn’s intercepted call with Russia was to legitimately “practice diplomacy.”

Remember: Mueller’s investigation found no evidence of Trump colluding with a foreign government, but it did prove Russia interfered in the 2016 election and that they are planning to do it again in 2020.

Whether “Obamagate” is still relevant when the general election is held appears unlikely unless more relevant documents are uncovered. For now, here’s a look at the presidential prop bets that could be affected should new details emerge in the coming months.

May 13 — Odds courtesy of Bovada

Will Trump Complete His First Term?

Will There Be A Recession In Trump’s 1st Term?

*Graded winner: The US economy must experience two consecutive quarters with a negative annual growth rate in real GDP (rounded to first decimal).

*Graded winner: Must result from a decision made by Twitter for “Yes” to be graded as a win. Any wagers placed on the same day news becomes public knowledge will be deemed void.

*Graded winner: Total votes tabulated by the Federal Election Commission for all states and the District of Columbia.

*Graded winner: As per the start of the 117th Congress.

*Graded winner: As per the start of the 117th Congress. If Senate makeup is tied, then the Vice-President’s party affiliation is the tiebreaker.