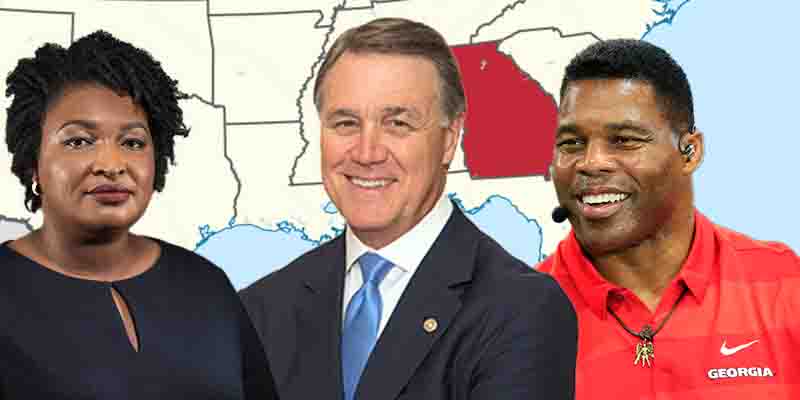 The latest odds for betting on Georgia elections are suggesting that 2020’s blue wave could be poised to return control to the Republican Party as GOP candidates are now favored for their 2022 Senate and Gubernatorial races.

After a tumultuous 2020 cycle that saw the elections of Democrats Raphael Warnock and Jon Ossoff, the GOP is now favored to recapture a US Senate seat.

Former NFL running back and Heisman Trophy winner from the University of Georgia, Herschel Walker, is now in the lead in the odds for betting on the US Senate in 2022.

The above political prop bet grants Walker a high probability of winning in 2022, and those chances are further backed up by the following Georgia US Senate line.

Because the United States Senate is controlled by a very slim Democratic Party majority, every state election victory will be viciously contended for. Control of the US Senate is on the line, and overall odds are leaning towards the Republican Party attaining the majority following November of 2022’s elections.

2018 Georgia Governor loser Stacey Abrams was hailed as the catalyst for the blue wave that doused GA in 2020. Abrams is now running for Governor of Georgia once again, but the current projections imply a grim outcome for her campaign.

The GOP is once again favored to win in the 2022 GA Gubernatorial Elections but who will the Republican Candidate be?

Right now, the guy who lost to Jon Ossoff in 2020, David Perdue, is leading the odds to become the next Governor of Georgia, and Abrams is currently ranked second overall.

What is intriguing about the above political futures odds is that Abrams is granted an identical chance of winning as her personal prop bet above, and the same as the DNC is getting in the overall GA Gubnernatorial line.

The lack of variance provides certainly that Abrams will become the DNC candidate for Governor in Georgia for 2022, but also strongly suggests that she will lose to the GOP no matter who wins the Republican Primary.

PredictIt is forecasting that Perdue and Abrams will indeed become the two primary winners in Georgia’s Governor election, and they are also suggesting that the Republican Party has a 60% chance of winning in 2022.

The above odds that suggest Walker will earn the GOP nod and win his US Senate election are also backed up by PredictIt’s analysts.

November of 2022 is a long way away, so any bets made now on the results will have to wait until a winner is declared before payouts can be collected.

The kicker is, as election day draws near, the odds often become more certain and moneylines have less profit potential. That’s why it pays to bet on the Georgia elections now and patiently await your winnings.