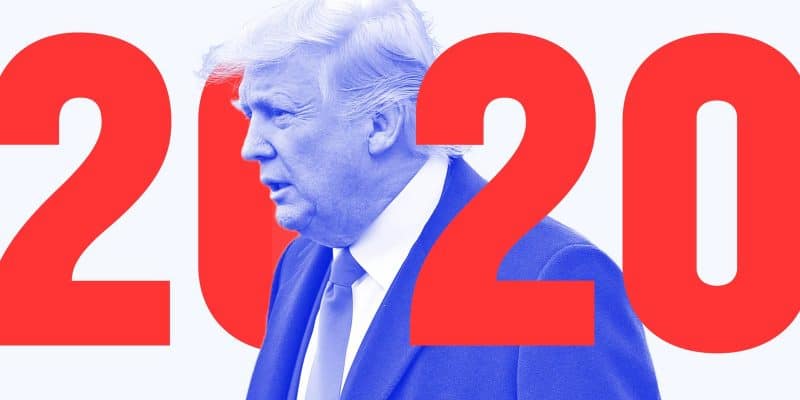 Odds Of Trump Winning Reelection In 2020

The Trump presidency took most people by surprise. If you looked at presidential election odds back in 2016, Trump was a fringe candidate in the beginning. Many took his candidacy as a farce, a satirical run at the mainstream political agenda and at a base level, a publicity stunt for the mogul.

However, as the Republican primaries drew nearer, it became obvious that Trump was becoming the clear choice based on reactions. Now that his presidency is underway, we can only look to 2020 and ask: what are the odds of Trump getting another go at being commander-in-chief?

There were a few random candidates in the 2016 bid for President of the United States, including people like Dr. Ben Carson, Bernie Sanders, Jill Stein, etc., but Donald Trump was one of the most politically removed (at least, looking at it on paper). However, his win opened the floodgates for other fringe candidates to enter their hat in for the 2020 election.

If you look at the Democrat odds and Republican odds for 2020, you will see some interesting characters. For example, you would never think to consider Dwayne “The Rock” Johnson as a candidate, though the former-wrestler-turned-actor has stated he would be interested. Famous musician Kanye West audaciously stated he would run for President in 2020, and he has the ego and money to pull it off.

None of this matters if Trump, who despite having low approval ratings, maintains his loyal fan base and is able to put another successful campaign together. The man has stated himself that he loves campaigning (probably more than he does sitting in the actual position).

His competitive spirit will likely lead to another boisterous campaign where his admirers will show up in droves. It might sound farfetched to think he has a shot of winning based on how his first year has gone, but the same people didn’t think he was capable of pulling off a win.

There are several things that can happen that would hurt Trump’s chances of reelection. For starters, an economic crash would certainly shake things up. While most economic analysts predict good fortunes, there is a possibility for economic shortcomings.

Trump has had difficulties implementing successful tax reform. Speaking of reform, healthcare could prove a crux for his administration, as they have made it one of their primary goals to repeal Obamacare, yet can’t seem to put together any feasible plans. North Korea seems to be a ticking time bomb, and if relations boil over with Kim Jong Un, there could be military action.

To be fair, that wouldn’t necessarily be Trump’s fault, but presidents are often the scapegoat in these types of situations.

Other factors that could influence Trump’s reelection odds are his age—he will be 71 years old in 2020—and the investigation into collusion with Russia. There are already rumors of him having health issues and his opponents will likely bring up his health as a point of discussion.

Allegations of corruption have spread around both sides of the political spectrum in the US, and if an investigation reveals that Trump was knowledgeable of any Russian interference, it will not bode well for his political future.

Whether any of these things happen remains to be seen. Trump has shown his fortitude when it comes to surviving political mishaps, and his supporters seem to be unwavering. Trump is still heavily favored in the political sportsbooks, so oddsmakers believe he will repeat as president, barring any of the above issues. 2020 will be an interesting election nevertheless, from both a political and betting standpoint.