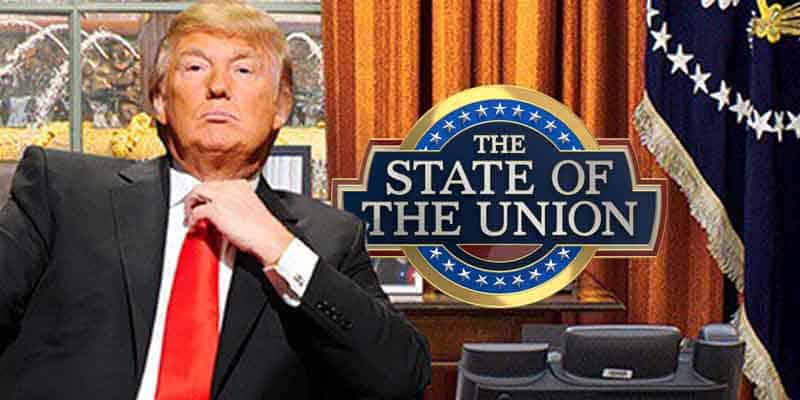 Odds Released for President Trump’s State of the Union Address

If you’re looking to make the president’s speech tonight a little more interesting, then the oddsmakers have got you covered.

President Donald Trump will deliver his State of the Union address tonight 9:00 PM EST before a joint session of Congress, and the White House has said the speech will contain a call for optimism and unity and attempt to press the reset button after two years of attacks by both Republicans and Democrats.

In addition, Trump will cover his plan to build a border wall along the southern border with Mexico—with or without funding from Congress.

Trump was scheduled to address the nation last month, but the speech was postponed by House Speaker Nancy Pelosi during the recent partial government shutdown that became the longest in United States history.

Shutting down the government again and declaring a national emergency are both options that Trump is considering. All sides have until February 15 before another shutdown would begin, and his plan to use national emergency funds to build a wall would likely go to court.

Earlier today, Trump tweeted that he has sent additional troops to the southern border.

Tremendous numbers of people are coming up through Mexico in the hopes of flooding our Southern Border. We have sent additional military. We will build a Human Wall if necessary. If we had a real Wall, this would be a non-event!

With a great deal of uncertainty looming ahead tonight’s speech, at least we can place a bet and win some money on Trump’s State of the Union address.

Bovada has posted several political odds for Trump’s speech, which include prop bets such as the over/under on the length of his speech and whether Trump will say “Wall” or “Huge” more times.

The odds for all of the State of the Union prop bets can be found below. Additionally, if you want to watch Trump’s speech tonight, we’ve included the live stream directly underneath the prop bets.

What will be the length of Donald Trump’s State of the Union?

What color will Donald Trump’s tie be?

Which will be said more times during the speech by Trump??

Will Alexandria Ocasio-Cortez stand at any point during Trump’s speech?

Ocasio-Cortez must stand between the start and completion of Trump’s speech for Yes to be graded the winner.

Will Trump use a nickname for Nancy Pelosi?