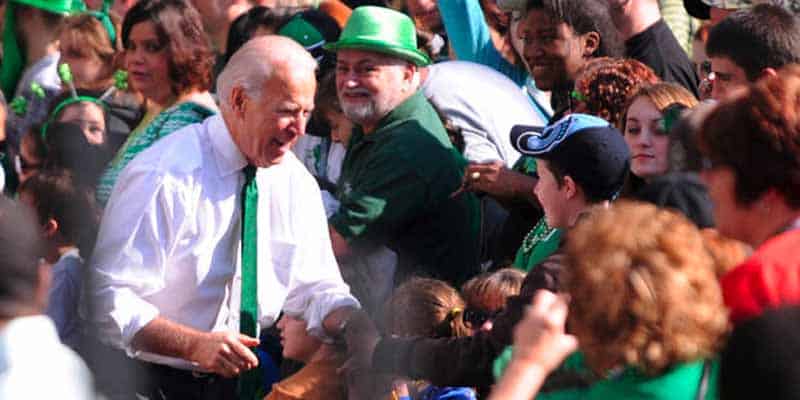 For the record, the image of Joe Biden wafting in a mix of St. Patrick’s Day luck and people supporting him is from years ago, but the odds favor it being a glimpse of what’s to come following today’s primaries.

That’s right. The Democratic National Committee and Tom Perez—sitting chair and man living up to his title and nothing more—are pushing ahead with primaries in Arizona, Florida, and Illinois on Tuesday, March 17, despite strong recommendations from the CDC two days ago to cancel all events of 50 or more people nationwide.

The Ohio Primary was postponed Monday night due to the risk of spreading COVID-19, which, at the time of writing, has  5,871 confirmed cases and killed 99 people in the United States, according to Worldometers. The worldwide toll is now 196,770 confirmed cases and 7,927 deaths from the coronavirus.

Governor Mike DeWine signed an executive order to overrule a judge that blocked requests to cancel the primaries earlier in the evening.

The #OhioPrimary is officially postponed. Thank you, Gov. Mike DeWine for limiting the spread of the #coronavirus and saving lives.

4,706 cases and 91 dead currently. The following state primaries must be postponed as well:#ArizonaPrimary#FloridaPrimary#IllinoisPrimary https://t.co/IvH6jmmb60

In the three states holding March 17 Democratic primary elections, voting so far—to put it lightly—has been a catastrophe, and voter turnout is projected to be extremely low due to fears of spreading the viral disease in large gatherings. Here are the latest updates from the three states who chose to not postpone today’s primaries:

Joe Biden’s odds indicate he’ll easily sweep all three states on St. Patrick’s Day, opening as the betting favorite to win the Arizona, Florida, and Illinois primaries from registered voters who are willing to risk spreading the coronavirus.

The betting odds for Bernie Sanders—at +1200 and +1600, respectively—look bleak on St. Patrick’s Day, ranging from a 2% to 4% chance in each Democratic primary.

There’s no way to know for sure what the DNC will do with the March 17 results, but the 2020 Democratic presidential nominee odds continue to favor the former VP following his big wins on Super Tuesday and Super Tuesday 2: Biden Boogaloo.

In addition to the Democratic primary and nominee odds below, you can also find the latest Vice President betting odds as well as a spread of 2020 political prop bets available for St. Patrick’s Day—just don’t venture out and spread the coronavirus today or any other day for the foreseeable future.

*The winner of the largest share of the popular vote in the 2020 Arizona Democratic Presidential Primary will be declared the winner.

*The winner of the largest share of the popular vote in the 2020 Florida Democratic Presidential Primary will be declared the winner.

*The winner of the largest share of the popular vote in the 2020 Illinois Democratic Presidential Primary will be declared the winner.

Who Will Joe Biden Choose To Be His Vice Presidential Running Mate?

Who Will Bernie Sanders Choose To Be His Vice Presidential Running Mate?

Will Bernie Sanders Drop Out Of The Presidential Race Before March 20th?

*Any wagers placed on the same day news is made public knowledge will be deemed void. Bookmanager’s decision is final.

*Total votes tabulated by the Federal Election Commission for all states and the District of Columbia.