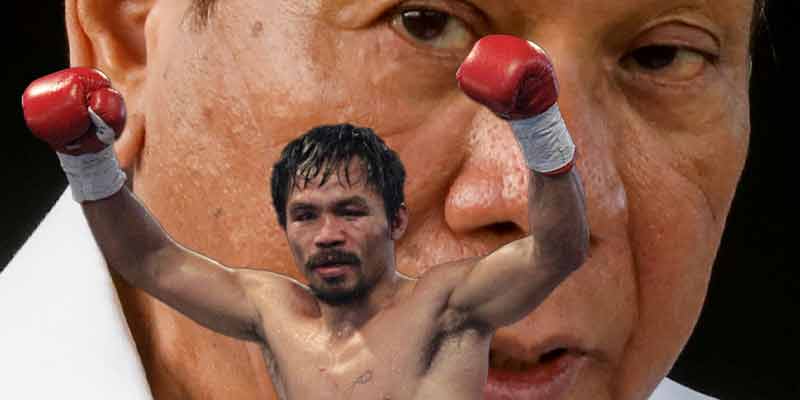 Two major online political sportsbooks have now posted odds that suggest Manny Pacquiao will become the next President of the Philippines, but do these lines denote that he will actually win once all votes are counted in May of 2022?

The following two futures lines at online sportsbooks offering PH Presidential Election odds both feature the same candidates in the first, second, and third positions, but there are variances in the moneylines that should be explored prior to laying any action.

The most profitable odds at international election betting sites for Manny Pacquiao at the moment are offered up at Bovada. Their +110 Pacquiao odds will payout at $1.10 for each dollar wagered next May if Manny becomes the next President of the Philippines.

Sara Duterte, daughter of outgoing PH President Rodrigo Duterte, and current Mayor of Davao City in the Philippines is coming in second overall and also has the better moneyline at Bovada.

Don’t look for a father-daughter ticket for 2022, as Rodrigo and Sara often disagree publicly on a variety of issues.

Bong Go is the former assistant to President Duterte and is a sitting PH Senator who has already refused a nomination from the PDP-Laban Party to run for office in 2022.

The main reason Go likely declined the nod was due to President Duterte himself attaching his efforts to the ticket as his running mate.

There is still speculation that the departing President is continuing to seek a ticket to align himself with for 2022, and once that occurs, a seismic shift in the political futures odds for the PH Presidency is expected to follow.

Political influence in the Philippines is mostly centered on power and influence, and Manny Pacquiao is arguably the most popular and well-thought-of resident currently.

The following political prop from BetOnline reveals some reason to be concerned about Pacquiao’s chances for success in 2022, as it casts some serious shade on his potential.

We believe this preliminary line offers unfavorable Manny Pacquiao betting odds because once President Duterte enters the race, the moneylines will be impacted.

Political bettors that believe the next President of the Philippines is already on the boards may want to consider placing a wager now, but be sure and lay it on the most advantageous moneyline by becoming a member with more than one book.

As is evidenced by the table above, different election odds, and even different political candidates, can be found and secured by not limiting your online betting options. The only downside to these Presidential election odds is that payouts will not occur until May of 2022 after a winner is declared.

Manny Pacquiao officially announced his retirement from boxing yesterday, so there should no longer be any doubt from pundits, constituents, and bettors as to the legitimacy of his candidacy and his intentions.

The only question that remains is whether his pugilistic skills will transfer to the political arena and deliver a knockout blow to Duterte’s attempts to cling to power.