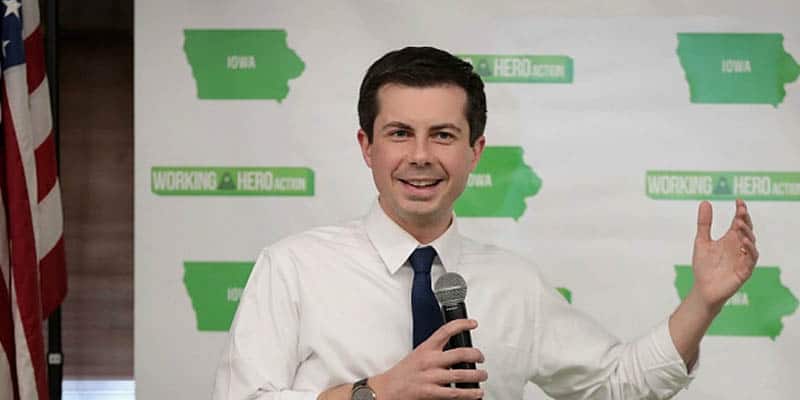 Iowa has long been regarding as one of the most crucial states heading into presidential elections.

Scheduled for February 3, 2020, the Iowa caucus is vital to a successful campaign. The Democrat with the most support during the caucus has gone on to win the party’s nomination in every election cycle since 1996.

According to a Suffolk University/USA TODAY Poll released this morning, Buttigieg has wedged himself into third place among Democratic hopefuls.

Taken between Wednesday and Friday of last week, former Vice President Joe Biden still tops the polls at 18%, followed by Sen. Elizabeth Warren at 17%, then Buttigieg at 13%. Sen. Bernie Sanders rounds out the top four with 9%.

The last time the poll was conducted in June, Buttigieg garnered 6% support.

David Paleologos, director of the Suffolk Political Research Center, thinks “Iowa is unquestionably up for grabs.”

Paleologos also stated that Buttigieg has “found a lane and is accelerating towards the front of the pack.”

Although Warren trails Biden in this particular poll, she leads the former VP in the odds. Warren is the favorite to win the Democratic nomination at -115 odds. Biden is second in the odds with +400 chances.

Buttigieg’s betting odds of +750 place him in third. These chances are tied with Sanders.

Buttigieg has branded himself as an alternative to far-left candidates like Warren or Sanders and from experienced Washingtonians like Biden.

It appears that the “everybody else” group has taken a liking to Mayor Pete. In the second and third quarters of 2019, Buttigieg raised over $44 million in donations.