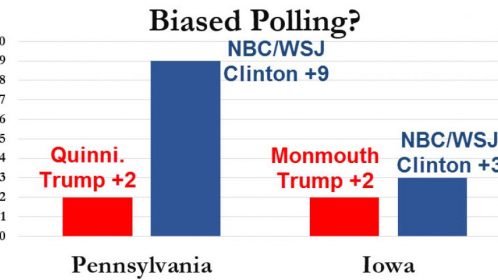 For those of you who join Donald Trump in being concerned about a ‘rigged’ election, you might just have some reason to be. One of the recent WikiLeaks distributions of data included a Podesta email that exposes a conversation discussing oversampling for polling in order to maximize media polling.

The email included a 37 page guide with regional recommendations for the oversampling index. For example, in statewide polling, the guide recommended an oversampling of Hispanics in Arizona and only polling in the most democratic friendly cities in Florida, including Tampa and Orlando.

This is by no means a new strategy for political parties. Polling results have been skewed and manufactured for decades. Now that we are ever present in the information and technology age, it cannot be concealed as easily anymore.

While those individuals claiming that polling manipulation existed were excused as conspiracy theorists, WikiLeaks has exonerated them by leaking evidence of oversampling being done by the democrat party. The most recent ABC / Washington Post polls that showed Clinton with a 12 point lead included a 9 point oversampling bias towards registered democrats.

So what is the purpose of skewing polling results? It’s all about public perception. If the pollsters are successful in convincing Trump supporters that he has no chance at beating Clinton, then it is more likely that they will stay home on Election Day and not cast a vote for him.

Based on this evidence released by WikiLeaks, we cannot just brush off Trump’s claims that the election is being rigged. Couple this with rumors coming out of Texas about faulty voting machines that flip party votes for president to Clinton when a voter selects republican down the line options, and the entire process is put into question.

If you really want to know where the candidates stand, check out the current presidential betting odds. The oddsmakers are not in the game to influence the election, but rather to capture the pulse of the American voters in order to present realistic and legitimate odds on who will become the next president of the United States.

Because the information used to create the odds is so much more comprehensive than polling, the sportsbooks that offer presidential betting lines are often more on the money than any of the polls circulating throughout the media.  This is why there are times when current polls and political betting odds do not line up very well.

I personally do not support either Hillary Clinton or Donald Trump for president, but this kind of malicious deceit undermines our democratic process, and causes me to loose all confidence in the voters of this nation being privy to a fair and honest democratic process for electing the next President of the United States. I am dismayed and heartbroken that my beloved country has evolved into just another nation that can’t rise above the fostering of corruption within our political election system.