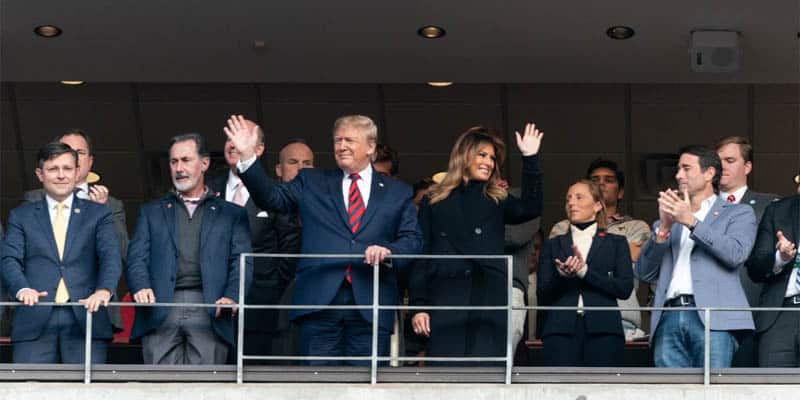 You can always bet on President Donald Trump finding a way to join the national conversation.

And tonight, Trump is using a tried-and-tested favorite in his playbook: attending a big-time college football game.

Trump—the favorite in the latest 2020 presidential election odds—will head down to the Mercedes-Benz Superdome in New Orleans, Louisiana, to attend tonight’s 2020 College Football Playoff National Championship between the No. 1 LSU Tigers and the No. 3 Clemson Tigers.

LSU is a 5-point favorite on the spread against Clemson in the CFP title game, and the total is set at over/under 67.5 points for both teams. Kickoff for the national championship is scheduled for 8:00 PM ET and the game can be watched/streamed on ESPN.

In addition to the betting lines and odds on the last game of the college football season, oddsmakers at online sportsbooks have also released Trump-related prop bets on his appearance at the title game.

Trump’s reelection odds indicate he is the overall favorite to win this year’s general election. At -110 ($11 bet wins $10), the oddsmakers believe the Republican incumbent currently has an approximately 52.38% chance of winning a second term in the White House.

But will the President be shown during the broadcast? Does Trump pick a winner or congratulate the winning team on Twitter? And what color tie will he wear to the game?

These are the types of political prop bets that are available alongside the more traditional statistics-based sports betting odds. Below you’ll find an analysis for each one concerning Trump.

Will Trump be shown during the broadcast?

Trump is no stranger to going to marquee college football games. He attends Army-Navy every year and was at the LSU-Alabama “Game of the Century” earlier this year. Trump was also at the Georgia-Alabama title game in 2018. In every instance, Trump was shown during the broadcast, so this appears to be a pretty safe bet.

While he didn’t attend Clemson’s victory over Alabama in last year’s national championship, Trump tweeted out his congratulations, which he’s does any time a sports champion is decided.

Congratulations to a truly great football team, the Clemson Tigers, on an incredible win last night against a powerful Alabama team. A big win also for the Great State of South Carolina. Look forward to seeing the team, and their brilliant coach, for the second time at the W.H.

Will Trump predict the winner before kickoff?

Despite being one of the most prolific trash-talkers on social media—usually aimed at his Democratic opponents—Trump hasn’t publicly “predicted” a winning team since he became President. He did pick the Denver Broncos to win Super Bowl 50, but that question was asked of all GOP candidates during a 2016 Republican primary debate.

Will Trump sing along to the national anthem?

Trump sang along when the national anthem was played prior to the 2018 national championship kickoff, and oddsmakers believe he’ll do it again if given a chance at this year’s title game.

When Trump doesn’t favor tweeting during a sporting event or even while holding a campaign rally. Since he tends to focus on whatever is directly happening in front of him, it’s unlikely he goes on Twitter during the game.

Last but not least, will Trump wear a red tie? Red is the primary color of the Republican Party and is Trump’s personal favorite color tie. Along with the 2018 national championship, at all four of the sporting events he attended in 2019—LSU-Alabama, Army-Navy, World Series Game 5, UFC 244—Trump was seen wearing a red tie, so bank on it being apart of the attire for his first game of 2020.