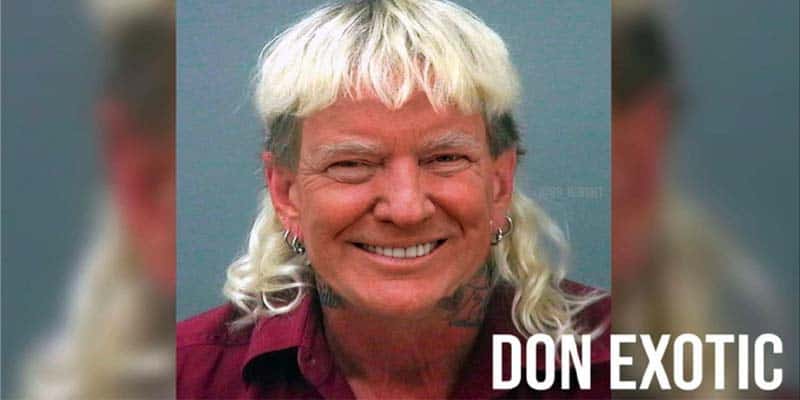 Will President Trump Pardon The Tiger King? Don’t Bet On It.

Not Biden, but the U.S. criminal justice system caught a “Tiger King” by the toe.

Oddsmakers from the top-rated Bovada sportsbook told me to pick one of the very best exotic political prop bets available today, and YOU — “Will Trump pardon and #FreeTigerKing?” — ARE IT!

Because people who spoil surprise outcomes are the worst, we here at Presidential Election Odds will stick to the basics for odds of whether “President Donald Trump pardons Joseph A. Maldonado-Passage/Tiger King/Joe Exotic” during his first term.

Avoiding spoilers and using math is possible for both fun hypotheticals and political proposition betting purposes.

With more than 3 out of every 4 Americans told to stay home and quarantine to prevent further the spread of the coronavirus, tens of millions are now watching copious amounts of Internet television.

“Tiger King: Murder, Mayhem, and Madness” has gone viral as a result, with the 7-part docuseries skyrocketing in viewership to become the most-watched show on Netflix.

According to Legal Sports Betting, the Tiger King is currently serving a 22-year prison sentence and asked Trump to give him a presidential pardon via a press release on Facebook.

“This lawsuit has been filed in the name of Justice, The Trump Administration must be made aware of the Overreach, perjury, abuse of power and the failure to uphold the Oath of their position which is truth and Justice for all. The Agencies and its counter parts have abused the system for a private agenda. The Director Dan Ashe used his Government position to creat an illegal monopoly with the AZA and shut down hard working American businesses for self gain. I have been illegally charged with these crimes and the Trump Administration, the United States Department of Interior along witht the Federal Wildlife service must be held accountable for what they have done to me, my parents and my family, along with my animals. Thank you and please share.”

Celebrities such as Kim K, Cardi B, Wiz K, and now even Meghan McCain, daughter of the late 2008 GOP presidential runner-up and veteran officer John McCain, have come out in support of freeing the Tiger King from his cage.

Meghan M, who is also one of the hosts on “The View,” even outright said President Trump should pardon the Tiger King on social media over the weekend.

'Tiger King' Joe Exotic deserves a presidential pardon for being the only thing to distract me from the #coronapocolypse since the outbreak…. https://t.co/GmlUsnQOKd

There are many big beautiful booby traps just lying and hoaxing around, and in normal times, maybe that would be enough.

Fortunately for the President, the Democratic presidential nominee betting odds have “hit the fan” over the past Fornite, so there’s no telling what result will come out of the postponed state primary elections.

Nevertheless, Trump pardoning the Tiger King is unlikely to happen, according to the Bovada oddsmakers, who set “Yes” on the prop at +575 odds and an 11% chance to occur during his first term.

For a political betting reference: A 100 unit/dollar bet on Trump to pardon the Tiger King would win your initial wager ($100, etc.) back plus pay out an additional 575 units/dollars on January 20, 2021 — the end of Number 45’s first term as POTUS.

However, oddsmakers favor Trump choosing not to pardon the Tiger King during his first term, opening “No” on the prop at  -1100 odds and with an 89% probability of happening.

For this likely to happen outcome, an 1100 unit/dollar bet is required and would payout 100 units/dollars if no presidential pardon is given to Joe Exotic before Donald Trump is sworn in for a second term or leaves the Oval Office.

The current U.S. Commander in Chief has a lot on his plate at the moment, and there’s a strong chance Trump is focusing all his time in the White House on limiting the death toll from the coronavirus and restarting the economy once health officials give him and his administration’s task force the green light.

The Tiger King pardon appears to be pretty low on the list of priorities for Trump. Unless there is some sort of massive online backlash if he says “No” then it’s unlikely to show up on his daily docket or briefings.

Trump’s Tiger King pardon prop (Yes +575/No -1100) is available online until January 20, 2021, so you can catch this bet on Bovada politics and hundreds more leading up to the 2020 U.S. presidential election on Tuesday, November 3.