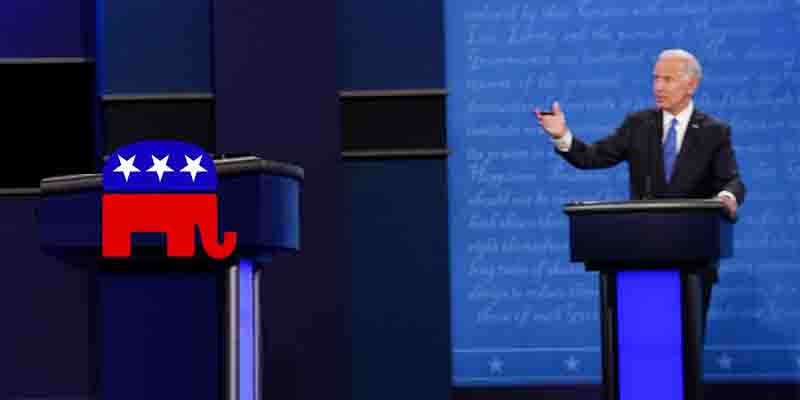 The Republican National Committee is considering whether they intend to send their future nominees for the President of the United States to the general debate stage going forth.

The RNC is demanding a number of changes in a letter recently sent to the Commission on Presidential Debates, and while this may be merely a cry for attention, the memo could gain enough traction for a policy revision or two.

Republicans feel that the Commission has shown bias in the past towards the Democratic Party and their nominees, and the list of demands is coming at a time when the two actors are already participating in heated opposition.

Many are speculating that this is a directive of former President Trump himself, specifically drawing from his frustrations over the 2020 debates where several new factors were introduced.

Betting on the Presidential debates hit an all-time peak during the 2020 Presidential Election cycle due to the COVID-19 complications presented and the backlash that the Commission faced from Republican Party leaders.

Are we now facing a scenario where political prop bets involving Presidential debates will be removed from the boards permanently? Not likely, as there are even Republican Party members that don’t align with the RNC’s tactics.

“{t}hat would be nuts. The American people want to see candidates for President debating issues of consequence to them, and it provides a service to the country and to the people, to hear the prospective candidates of the two major parties duke it out.”

These actions appear to have the side benefit of being a stall tactic until after the 2022 midterm elections, a cycle where the Republican Party is hopeful to retake a majority in the US Senate and House.

The Commission has taken the stance of only dealing with candidates that have officially declared for office and have filed the appropriate paperwork.

It seems that the Debate Commission and the RNC are prepared to play chess for the next several months if the current glacial pace of correspondence keeps up.

While there is the potential for debate odds to appear for betting on the 2022 Midterm Elections for Congress and state governor races. those aren’t posted often because the engagements are often only televised to regional audiences.

One item of contention that will need to change in order to satisfy the RNC is the moderator selection process, as prior choices have been slanted too far in one direction or the other.

There is also the potential of a backlash from the GOP’s declination to participate in the Presidential debates, as it could reveal to voters a lack of confidence in their ideologies at a crucial time in the history of the United States.

The current stances of the Republican National Committee and the Debate Commission are likely to hold until 2022 and beyond. The eventual GOP nominee for POTUS, be it Donald Trump, Florida Governor Ron DeSantis, or a candidate yet to be determined, will factor heavily into how the debates proceed.