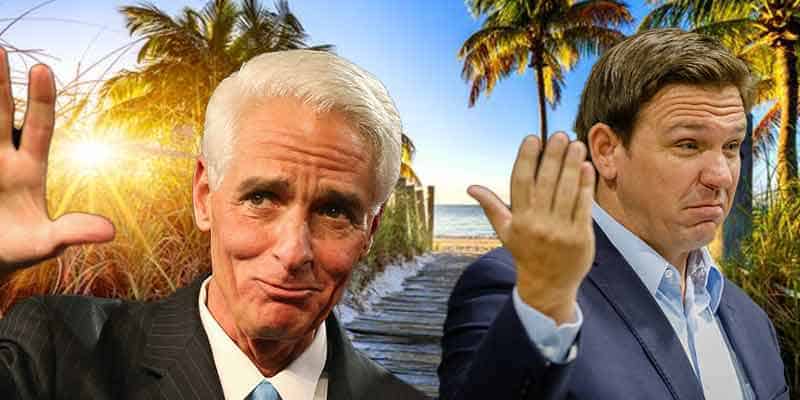 Ron DeSantis is the future of the Republican Party and is expected to take the helm of the GOP following Donald Trump’s eventual departure from political relevance.

If Trump were somehow out of the picture, the Presidential betting odds for Ron DeSantis would place him atop all GOP contenders for the White House in 2024, and considering his record during COVID-19, he’d have a solid shot at winning.

The one open avenue of vulnerability for Ron DeSantis is bid for re-election to become Florida’s Governor once again in 2022. A loss in the Gubernatorial elections would place doubt on his capabilities, especially considering who he is currently up against.

Former Governor of Florida Charlie Crist is once again running for office as a member of the Democratic Party, and he now appears to be in a dead heat with incumbent Ron DeSantis in the overall odds at Gubernatorial betting sites.

Crist is drawing even money at MyBookie, with DeSantis coming in slightly ahead with a -138 moneyline that’ll net $1 for each $1.38 wagered if Ron wins his reelection bid.

Before Crist can advance to the general election cycle, he must win his DNC primary where he is up against former Florida Commissioner of Agriculture, Nikki Fried. There are no lines for Fried vs. Crist at the moment, but Florida election betting sites are now featuring political odds that reveal Nikki is not a legitimate contender for office in the eyes of bettors and bookmakers.

Since the turn of the century, Florida has leaned hard right and has only elected Republican Governors. The same can be said across state and local politics around Florida. On the surface, Crist appears to be a lame-duck candidate, but observers cannot deny his impact on the betting odds as well as in prior election campaigns.

One could say that Crist merely flipped to the DNC as a matter of convenience, believing that it would buy him additional cred during a time where the administration of President George W. Bush was facing heavy scrutiny and was incredibly unpopular.

It seems that Crist has been given a free pass to change his tune at will, but it has not resulted in election victories thus far. His latest efforts at demanding additional COVID-19 vaccine approvals appear to place him in the crosshairs of DeSantis – but is that a solid gameplan for success considering Ron’s track record?

Fried and Crist are now going head-to-head over his flip-flopping, and they plan to carry that momentum through to when voters stuff ballot boxes for the Democratic Primaries for Florida Governor on August 23, 2022.