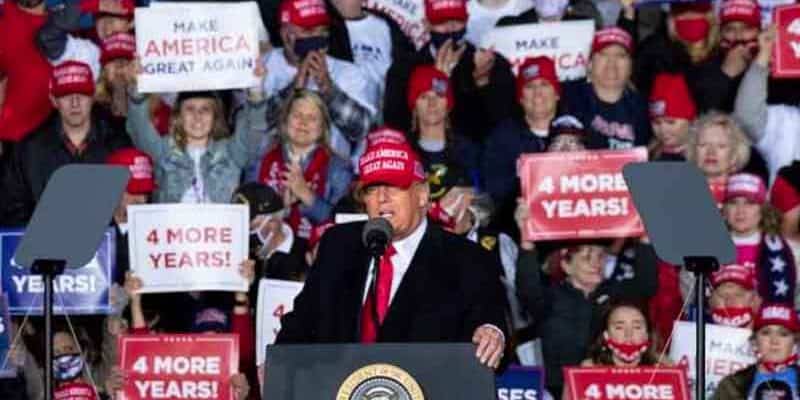 President Donald Trump sets his sight on Valdosta, GA this Saturday, scheduled to rally for Republican senatorial candidates Kelly Loeffler and David Perdue. His presence comes amid concerns by GOP officials on the effect of Trump’s voter-fraud allegations on the right-leaning Georgian electorate.

Loeffler and Perdue both run to maintain their Senatorial seats and de facto retain GOP Senate control. Trump plans to rally on their behalf in his largest public appearance since losing Georgia last month.

If Loeffler and Perdue win both of their races, the GOP-led Senate could exercise their veto control of the Biden administration. With the House and the Presidency both in Democratic control, Republicans put all their weight behind Georgia.

Here are the Senate election odds for Loeffler and Perdue.

Here are those same odds from when we last covered the Georgia election in November.

These moneylines show an apparent shift away from the strong favor that Perdue and Loeffler felt early last month. Loeffler’s race has the most drastic change, more than halving her original lead. If this trend continues through to next month, Warnock could come in for an underdog victory.

David Perdue has also lost some of his lead but to a much lesser extent. With higher action on Loeffler’s race, we recommend considering an underdog Warnock pick now and wait for the action to keep building over the next month.

For Perdue, his race will be tooth-and-nail, but if you take a risk on Warnock, consider taking the safer bet on Perdue. If you are unsure how to go, these odds may shift after Donald Trump holds his Valdosta rally.

Some Republicans have expressed concerns over the President sending conflicting messages to the Georgia electorate, saying not to trust the voting system on hand and saying to go vote for Perdue and Loeffler on the other hand.

Countless other officials do not express the same concern, figures such as Sen. Marco Rubio and Sen Rick Scott of Florida, and Vice-President Mike Pence, all of whom are 2024 Presidential Republican nominee hopefuls, came out to rally for the Senate race.

For now, we wait and see how the odds continue to shift over the last month of action.