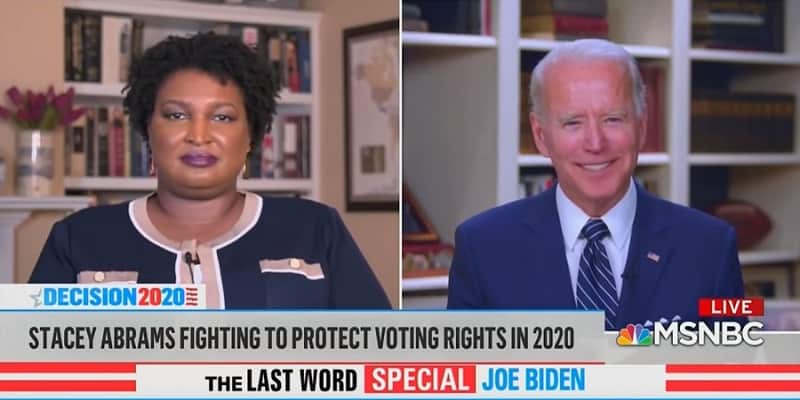 Stacey Abrams, the 2018 Georgia gubernatorial midterms runner-up, recently went “all-in” on portraying herself as the runaway favorite — and even as runway superwoman model — to be the Vice Presidential running mate for Joe Biden on the Democratic ticket.

However, while Abrams will undoubtedly be a White House contender in the future, the former Georgia state representative should probably slow down her self-propelled rise to prominence in American politics.

For 2020 that is. Or, at the very least — Abrams should consider practicing a poker face to hide the harsh-but-true lesson she learned from Biden when she appeared with former President Barack Obama’s VP during a cable news interview.

The vetting process for the Democratic VP is already underway, and Biden, who is a slight underdog to President Donald Trump for the general election matchup, has been hosting “mock tryouts” for the top potential female running mates.

Kyle Kulinski, a political commentator and host of Secular Talk, recently gave his take on the disappointing reaction by Abrams when she appeared in a recent MSNBC interview with Biden.

As Kulinski points out in his YouTube video, it’s very plausible that Biden and his campaign wanted to bring Abrams back down to Earth since “puff-pieces” are not what America needs from her or anyone when nearly 40 million have filed for unemployment in the past three months.

Political oddsmakers for the 2020 US presidential election have consistently seen bettors keep Abrams’ odds of becoming VP in the top five since she is among the shortlist of Biden’s potential Veep candidates.

Bovada Sportsbook currently lists Abrams as the fourth most likely pick at +900 according to their Joe Biden VP betting odds, meaning a $100 wager would win $900.

Apart from Abrams desperately needing to hide her disappointment when she realized Biden was not currently selecting her right then and there as VP, it’s hard to imagine her publicly tour will bold well for her 2020 Veep chances. Also: Someone close to Abrams should have told her that Biden won’t likely choose his running mate until July or August.

She’s already the least qualified of the top female Democratic contenders. To give a less “opportunistic” appearance, Abrams should strongly consider accepting another job in the potential Biden administration or at least hold public office again, whether at the state or federal level, before reaching for the more high-profile positions.

Abrams’ recent usage of bedrocks in American journalism, such as The Washington Post, is now coming under overwhelming scrutiny from newspapers and media outlets on both sides of the political aisle. It may be time to move on from the Oscar-worthy “Who me?” reactions, but it’s also pretty obvious Abrams’ VP strategy lies at the other extreme end of the political spectrum.

Most importantly: It’s obviously something that made Biden and his campaign staff feel uncomfortable to the point that they felt the need to put an end to Abrams’ strut on the “blue carpet.”

And while Abrams might not be “officially” out of the running, given recent events, bettors should not expect Biden to bet on her as the Vice Presidential running on the 2020 Democratic ticket.

May 19 — Odds courtesy of Bovada