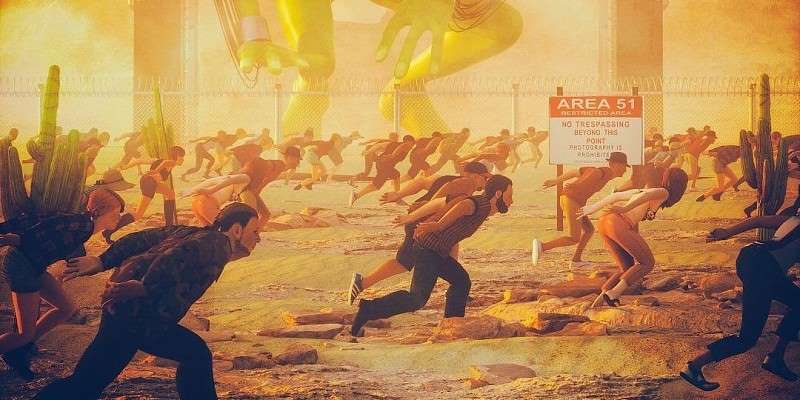 On June 27, California college student Matty Roberts posted the above Facebook event, scheduled for the wee hours on Friday, September 20. The tongue-in-cheek raid, while clearly a parody, has since garnered wide mainstream support, with over 2 million Facebook users stating their intent to attend.

For his part, Roberts has since sought to downplay the event, going so far as to move an associated music festival from Rachel, Nevada, to Las Vegas. Even the name of that offshoot festival was tabled, with Roberts opting for a more sedate sobriquet. Thus, “Alienstock” is now called the “Area 51 Celebration.”

Still, the phenomenon has taken on a life of its own, and there seems to be no slowing its roll. Sportsbooks have also taken note, with BetOnline even posting a few props on the event.

How Many People Will Be Arrested In Rachel, Nevada?

Will Anyone Illegally Access Rachel Military Base (aka Area 51)?

Officially, the US government has discouraged attendees from entering the restricted zones surrounding the mysterious air force installation, but they are otherwise not taking the “threat” too seriously.

The United States Air Force is aware of the Facebook post. The Nevada Test and Training Range is an area where the Air Force tests and trains combat aircraft. As a matter of practice, we do not discuss specific security measures, but any attempt to illegally access military installations or military training areas is dangerous.

Boilerplate to be sure, but sensible enough.

Nevertheless, the Area 51 cottage industry in Rachel is gearing up for an influx of up to 40,000 potential visitors and customers.

In August, Lincoln County even issued an emergency declaration, effectively pooling resources from surrounding communities to control the massive crowd.

Even major players in popular culture are getting in on the act, with crossover rapper Lil Nas X releasing an Area 51-themed version of his number-one hit, “Old Town Road.”

Of course, the event isn’t completely spontaneous in its viral spread. Much of the interest in the Storm Area 51 event was prompted by a June Pentagon briefing on a number of suspected UFO sightings.

Now, just days before the Area 51 event, a new controversy is swirling as the US Navy has confirmed that a trio of fantastical leaked videos are genuine and document “unexplained aerial phenomena.”

Adding to the intrigue, the Navy says the videos should have never been released to the public.

Of course, if these are videos of classified military aircraft tests, that company line is perfectly by the book. What else are they supposed to say? Lockheed’s Skunk Works PR team wasn’t exactly forthcoming back in the day, either.

Asked what he makes of these UFO sightings, President Donald Trump wasn’t all that impressed, telling ABC News’ George Stephanopoulos that he’s content with letting those who spot such vehicles to “think whatever they think.”

“I did have one very brief meeting on it,” said Trump. “…[P]eople are saying they’re seeing UFOs. Do I believe it? Not particularly. … [But] we’re watching, and you’ll be the first to know.”

Naturally, you should take Trump’s above statement with a grain of salt. The president’s reptilian overlords from the Pleiades wouldn’t want their Earth representative to spill the beans, after all.

What, you don’t think that space aliens are pulling the strings, here?

Get real. What else could possibly explain Trump’s lofty perch high atop the latest presidential election odds?