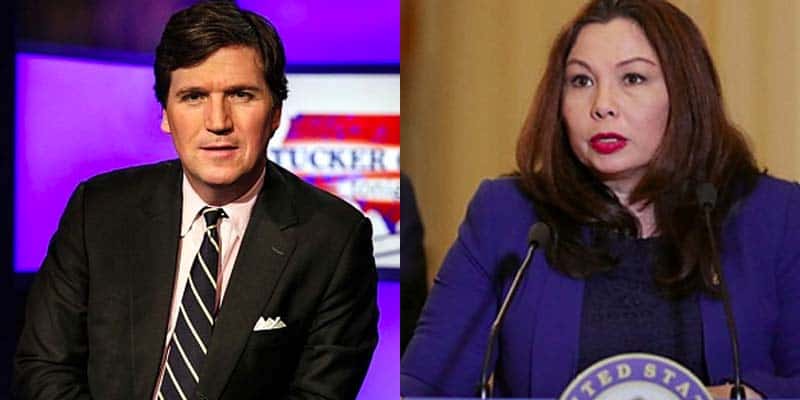 During a CNN interview on Sunday evening, US Senator from Illinois, Tammy Duckworth, discussed the potential for removing monuments dedicated to the first President of the United States, George Washington, citing the fact that he was a slave owner.

We have every right to fight to preserve our nation, heritage and culture. When vandals like Tammy Duckworth and Ilhan Omar tell us that we’re not allowed to question their patriotism, as they scream about how horrible this country is, we have every right to laugh in their faces. pic.twitter.com/0xjVtUaG3P

Carlson’s response left many confused because he called Senator Duckworth’s patriotism into question. Duckworth is a former US Army helicopter pilot who received many awards for her service, including a Purple Heart.

In 2004, while serving in Iraq, a helicopter she was piloting was hit by a rocket-propelled-grenade fired by insurgent forces. The ensuing crash caused her to receive many injuries and resulted in the amputation of both of her legs.

Carlson has spent the last 11 years working as an on-air talent for FOX News, and spent the previous decade working at CNN and MSNBC. His show sports enormous viewer ratings and is a hit amongst people who are politically conservative.

While those attributes are nothing to scoff at, it does bring into question his position of taking a shot at a decorated soldier’s patriotism, especially one who has sacrificed to the level that Duckworth has. Senator Duckworth took to Twitter for a brief response to Carlson.

Does @TuckerCarlson want to walk a mile in my legs and then tell me whether or not I love America?

A few short weeks ago, DNC Presidential nominee, Joe Biden, had narrowed his potential Vice President picks down to four candidates. Following the exchange between Duckworth and Carlson, the Senator from Illinois has now reemerged as the third-leading candidate to become Biden’s VP selection.

Many in the political arena have suggested that Biden select a female VP, and his campaign, as well as the betting odds at political sportsbooks, suggest that a woman will join him in his election efforts.

Police reform is on the minds of many across the nation as the Black Lives Matter movement continues to protest the unjust treatment of African American’s by law enforcement.

Duckworth’s home region contains the city of Chicago, which ranks highest in gun-related deaths per capita in the world. Over the July 4 weekend, 79 people were shot in Chicago, resulting in 15 deaths, according to the Chicago Sun-Times.

Duckworth’s policies have done little to affect the gun violence in Chicago and therefore would not make the most fitting candidate to tie to Biden’s campaign.

The smart money is still on Florida Congresswoman Val Demings. She is currently sitting at +850 odds of attaining the VP nod, which means that a wager of $100 can earn a payout of $850.

Demings’ prior experience includes serving as the Orlando Chief of Police, which grants her crucial insight into police tactics, and what procedural methods could be altered to allow for greater trust between law enforcement and the African American community.

The 2020 Presidential election is now less than four months away, so Joe Biden should make his Vice-Presidential running mate selection very soon. Make sure to place a wager before the choice is made and the betting odds disappear.