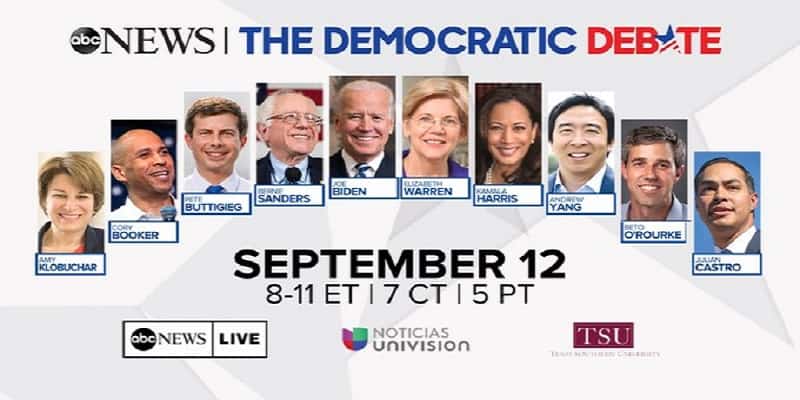 With only ten candidates qualifying for the third Democratic debate in Houston, Texas, every party hopeful will be on stage together on Thursday, September 12.

The two exemplify the dichotomy within the party; Biden is a centrist moderate while Warren is further left on the political spectrum.

To add even more drama to the showdown, Biden and Warren will be positioned next to one another on stage Thursday, according to the freshly-released lineup. On the other side of Biden will be Sen. Bernie Sanders (+550), another leftist and self-identifying democratic socialist.

From left to right, the Houston stage will feature the following placements:

The lineup corresponds with each candidate’s polling numbers. The middle is reserved for the highest polling Democrats, like Warren and Biden, while the outer edges have lesser-known names like Sen. Amy Klobuchar and former HUD Secretary Julián Castro.

Consequently, this also makes it easy to follow the Democratic nomination betting odds since the lineup directly mirrors each candidates’ chances of taking on President Donald Trump in the 2020 presidential election.

To watch the Houston debate, held at Texas Southern University, tune into ABC, ABC News Live, or Univision between 8 and 11 p.m. ET September 12. The debate will also be available to stream on ABCNews.com and YouTube.

Prop bets for the debate will start trickling in now that it’s so close, so keep an eye out for that information here. Until then, a list is provided of each Democrat’s odds of earning the party nomination for the 2020 election.