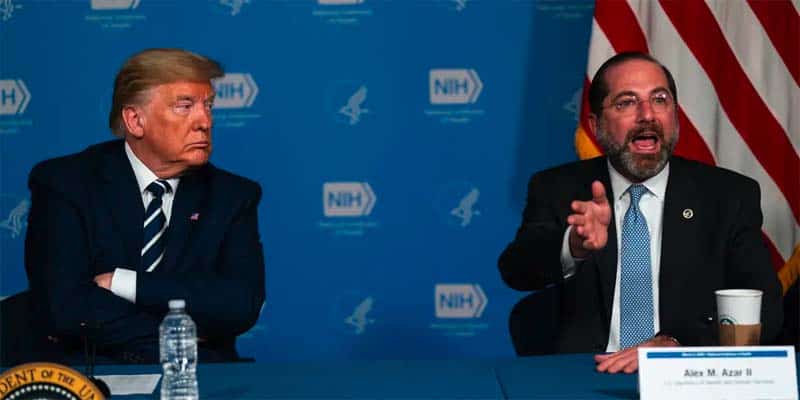 Serving as a member of President Donald Trump’s cabinet has been like a game of Russian roulette.

The only difference is the White House cabinet members have worse odds of surviving their first term in the Trump Administration.

Even with the ongoing coronavirus pandemic in the United States and around the globe, the Bovada oddsmakers have posted a presidential prop bet that favors Health and Human Services Secretary Alex Azar as the next member to leave Trump’s cabinet.

Next To Leave Trump Cabinet Odds

*In the event that two or more of the listed individuals leave office at the same time, the individual with the first alphabetical last name will be declared the winner.

Who Will Leave President Trump’s Cabinet Next?

Trump’s odds of winning reelection have begun to slip as of late, and the administration’s response to the spread of COVID-19 is a major contributing factor to why the 2020 election odds have started to look less favorable for the Republican incumbent.

The coronavirus pandemic is unquestionably the biggest challenge that the Trump administration has faced during Trump’s first term in office. However, what America looks like on November 3, 2020, will likely determine whether he is elected to a second term.

Health Secretary Azar is a heavy favorite compared to the rest of the field that could be next to pack their bags, whether it’s via resignation or Trump’s “You’re Fired” trademark.

As for why Azar is favored, the oddsmakers likely predicted the days are numbered for the current head of the HHS. After leading the initial response to the outbreak, Azar suddenly took a backseat for unknown reasons once the administration began holding daily press briefings for the White House coronavirus task force.

At +130, Azar has a roughly 36% chance to be the next cabinet member to leave the administration out of the eligible heads of federal executive departments that are in the presidential line of succession. If Azar is the next to go, a $100 bet will win $130.

For comparison: Secretary of Veterans Affairs Robert Wilkie is listed with the second-highest chance at +475, which converts to only about a 14% implied probability and where a $100 bet would win $475.

The Cabinet of the President holds 16 positions, which includes the Vice President, along with 15 members requiring U.S. Senate approval to be sworn in. Below is a list of the current White House cabinet members in the Trump Administration and is followed by a reference to each individual who has resigned during his first term.

According to the Brookings Institution, Trump’s cabinet has the highest turnover rate of any of the past five administrations with ten members leaving their sworn positions—Ronald Reagan (6), George H.W. Bush (8), Bill Clinton (4), George W. Bush (2), Barack Obama (3).

In remembrance of those who are no longer with the Trump administration, we are gathered here today for the purposes of betting on who will be next to join the dearly departed. Regardless of who you bet on to eventually rest in peace, just be sure to honor his or her leave with a moment of silence or, at the very least: Press F to Pay Respects.