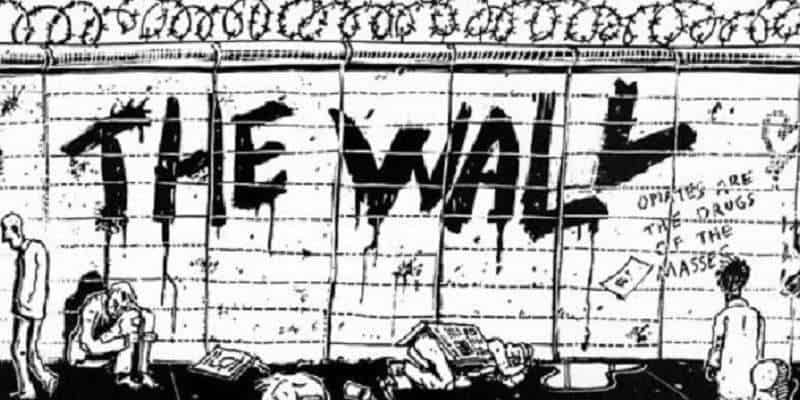 What Are The Odds: Did Trump Base Historic Campaign Off Obscure 1990 Comic Strip?

They say you can’t predict the future, and Donald Trump’s unlikely 2016 Presidential run and summary victory would seem to bear that out.

Per every polling outlet, his chances to win were abysmal, and all the major political betting sites had Trump’s election odds trending far behind Democratic rival Hillary Clinton’s in the months and days leading up to the election.

But at least one person saw Trump’s historic triumph coming decades ago, and he drew a comic strip about it.

In 1990, Peter Kuper, better known as one of the cartoonists behind the long-running Spy vs. Spy series, submitted an innocuous 12-page cartoon to Heavy Metal magazine. The story, called “The Wall” and starring The Donald himself, ran in the July 1990 issue of the adult fantasy publication.

But somehow, some way, this particular fantasy actually came true.

You’ve got to see it to believe it. 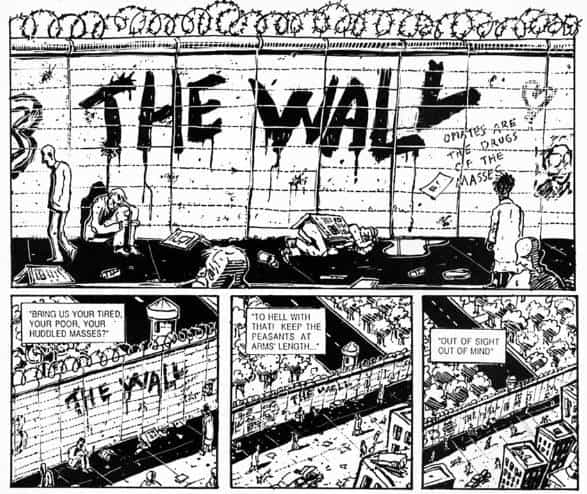 This hardly needs any explanation, as the “big, beautiful wall” was one of the chief pillars of Trump’s 2016 campaign. Above, the wall is built around New York City, though the modern version is designed to cordon off the entire United States.

While this is the most straightforward parallel between the old cartoon and our modern reality, it’s just the tip of this crazy iceberg. 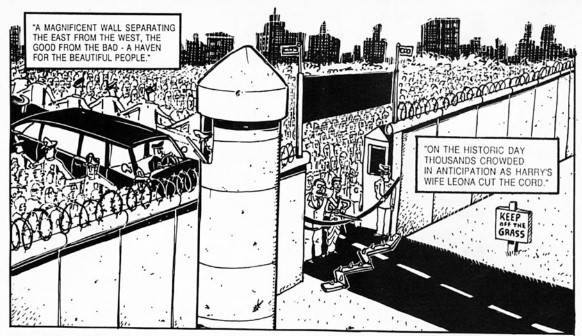 The general criticism of Trump’s wall in the here and now is that it’s symbolic of the installation of a tiered society. Many Americans support a more robust southern border barrier, but the push to build the wall has helped label Trump as a racist, nationalist, and white supremacist.

Fairly or unfairly, critics say that Trump’s rhetoric is adding fuel to the fire of deep-seated social division in the United States.

Trump’s opposition on Capitol Hill and in the mainstream media is well-documented. A look at the current impeachment inquiry against The Donald, as well as a glance at the Trump impeachment odds, bear out his general unpopularity among colleagues, peers, and pundits.

Clearly, large swaths of the American political class and general public want him eliminated from his post as President. 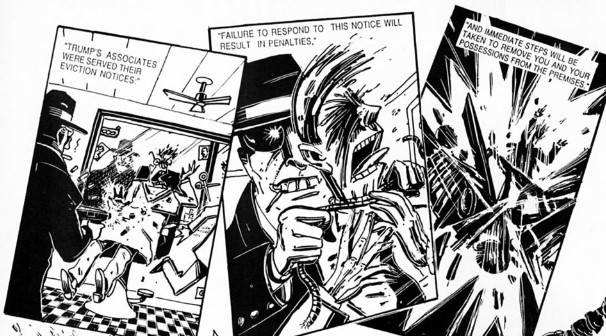 While the much-hyped Mueller Report didn’t have the desired effect of ousting Trump from what many claim to be an illegitimate Presidency, it did uncover various crimes committed by those in his inner circle. Paul Manafort and Michael Flynn are the most notable Trump insiders to see jail time as a result. 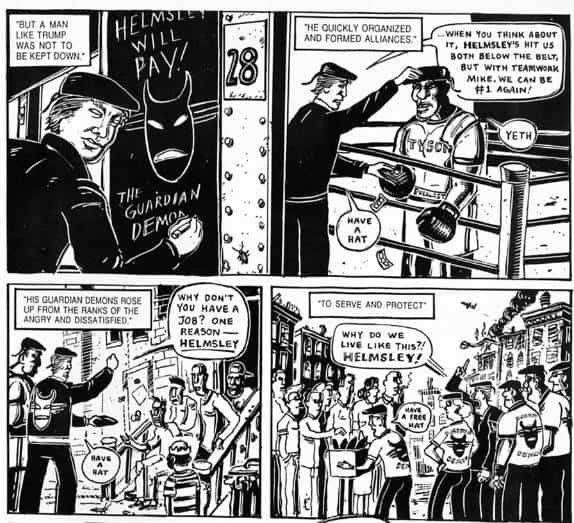 By now, everyone is familiar with the famous red hat.

Trump has a history of hobnobbing with the most popular athletes of the era. In 1990, that was Iron Mike Tyson, among others. These days, it’s NFL GOAT Tom Brady (along with New England Patriots owner Robert Kraft).

MMA star Jorge Masvidal also hopped aboard the Trump Train after a recent high-profile UFC fight and got an enthusiastic retweet from the POTUS.

If Trump hadn’t taken his campaign slogan from Ronald Reagan, he’d likely have lifted it from Kuper. 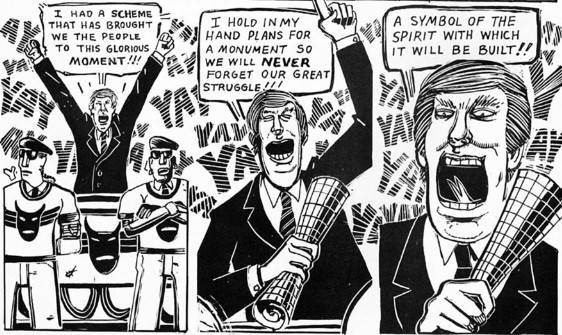 If you’ve ever heard The Donald deliver a speech to an arena full of supporters, this is about what it sounds like. Lots of bluster, lots of ego, and a whole bunch of ear-splitting adulation.

The forked tongue might be a bit much, but about half the country probably agrees with it. 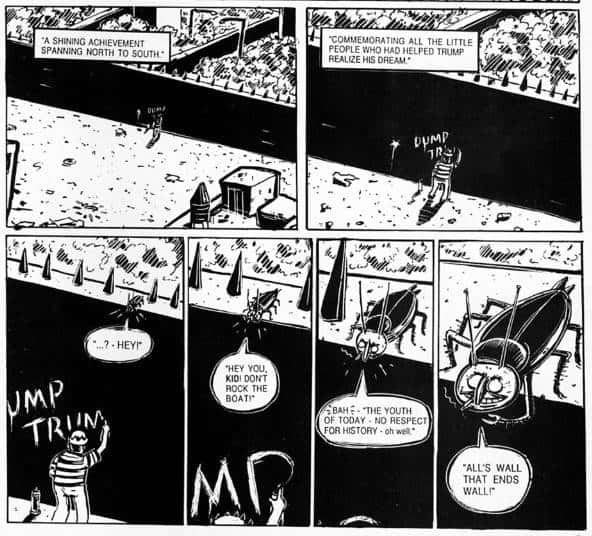 #DumpTrump has been trending on Twitter for three years.

Uncanny, right? Mind blown and all that.

When Trump was elected as the 45th President of the United States, Heavy Metal was quick to remind its loyal readers about Kuper’s prescience, publishing an article with plenty of backstory.

Still, many who came across Kuper’s now-famous short piece questioned whether or not something so eerily accurate could possibly be real, given its 1990 release. Debunking website Snopes was even asked to fact-check “The Wall”, which they did, confirming its veracity.

The only real mystery is how Kuper got so much so right. He’s not Nostradamus, and per Snopes, he recently lamented that his musings came true:

“I wish my pen, instead of predicting the future, would be able to change current events.”

Clearly, in June or July of 1990, Donald Trump was informed by someone or other that he’d been featured in a semi-popular niche fantasy rag. The real estate magnate then left his office in Trump Tower on Fifth Avenue in NYC, took the elevator down to street level, stepped outside, and found the nearest magazine stand.

There, he purchased a copy of Heavy Metal for $3.95, learned everything he needed to know about how to run a successful Presidential campaign, and the rest is history.

Obviously, you can’t really wager on which comic Trump will use to inform his 2020 re-election strategy, though “Swamp Thing” would probably be a heavy favorite if you could.

However, there are plenty of political betting odds available for every other aspect of what’s sure to be the most hotly contested Presidential race in history.

You can read the complete version of “The Wall” at Imgur or at the Internet Archives.