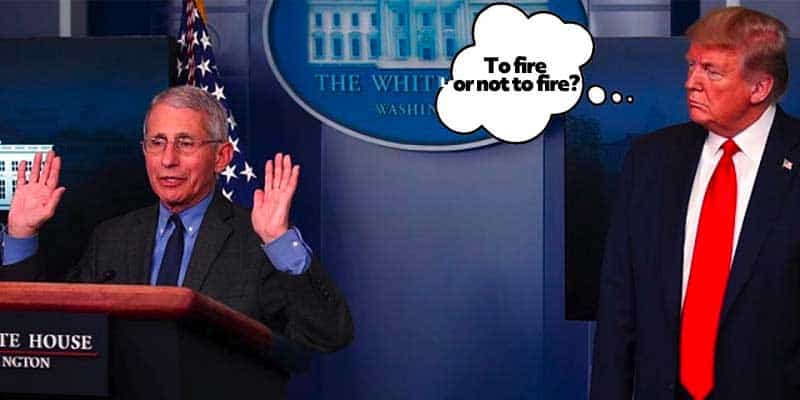 Will Trump Fire Fauci? Oddsmakers Give Their Prognosis.

After recent events, that is likely one of the many questions rolling around in President Donald Trump’s mind whenever Dr. Anthony Fauci, one of the lead members of the White House Coronavirus Task Force, speaks during the administration’s daily press briefings.

But is #FireFauci likely to payout? Or will the President realize the doctor is his best chance of winning re-election? Trump’s re-election betting odds are favored, but would giving the boot to one of humanity’s best health experts during a pandemic cross the line?

Let’s dive in to see if “You’re fired” is in Fauci’s future, but he’s a brief summary of the 2020 election odds we’ll be covering:

Will Anthony Fauci be fired or resign before 2021?

Betting Analysis: The Trump-Fauci drama has likely existed since they first met. But in regards to the proposition wager, the most recent escalation began when the doctor said in a CNN interview, more lives could have been saved if mitigation efforts began sooner.

“I mean, obviously, you could logically say that if you had a process that was ongoing and you started mitigation earlier, you could have saved lives,” Fauci told CNN’s Jake Tapper on Sunday.

Later that night, Trump retweeted a post that included the hashtag #FireFauci and soon started trending as many of the President’s 77 million Twitter followers began to join the discussion.

Sorry Fake News, it’s all on tape. I banned China long before people spoke up. Thank you @OANN https://t.co/d40JQkUZg5

But according to the political oddsmakers at BetOnline, there is roughly “no chance” Fauci leaves Trump’s coronavirus task force before 2021.

“No” is listed at -3300, which means the online sportsbook gives Fauci a 95.08% chance to stay with the administration, based on the betting odds when converted to a true percentage chance probability.

Since the odds for the proposition are currently live, it’s worth noting the payout is low due to the high likelihood of the outcome. For example: $33 bet wins $1, $330 bet wins $10, etc.

On the other hopefully washed hand: “Yes” for Fauci firing and resignation is +1200 and has a low 4.92% chance to occur.

However, “No” at -3300 is likely safe given how Dr. Anthony Fauci is one of the world’s leading experts on infectious diseases and has been a health advisor to every US president since Ronald Reagan. With that in mind, there is an extremely low chance Donald Trump fires him, or the doctor resigns before January 1, 2021.

Betting Analysis: Odds are also available on how long Trump’s coronavirus task force press briefing will last on Wednesday, April 15. The conferences are now held daily, typically in mid-afternoon or early evening, which means this presidential prop wager could become a fixture at sportsbooks for the foreseeable future.

After researching Trump’s past coronavirus briefs on the official White House YouTube channel, it’s safe to say the BetOnline oddsmakers have also done their homework.

The total length of time for today’s presser is set at 90 minutes. Unfortunately, because the “Trump Card” is literally a “Wild Card,” there is no pattern that can be reasonably identified.

Below is the length of each daily White House coronavirus task force briefing since the start of April. Other than when Trump took off Easter Weekend, there have been 12 press conferences held, and the “over” has landed on 8 occasions.

Will the Trump Administration permanently stop funding WHO before 2021?

Betting Analysis: On Tuesday, President Trump said he planned to halt funding to the  halted funding to the World Health Organization (WHO) for what he called its failures in the crisis

“Everybody knows what is going on there,” he said, citing the WHO’s “disastrous decision to oppose travel restrictions from China and other nations” as the reason for the pause on funds.

In 2019, the US government funded approximately $553 million of WHO’s $6 billion budget, but Trump would not say yesterday whether he would permanently stop all funding to the health agency of the United Nations. However, the President did say the administration is looking to complete a full review of how WHO has handled the virus overall.

The Trump-WHO funding prop bet’s deadline is set for January 1, 2021. Since the time table is less than eight months, it’s very likely the administration’s review process won’t make any “permanent” determinations until the pandemic has ended — meaning “No -1000” is much more likely to be the outcome for WHO funds before 2020 ends.