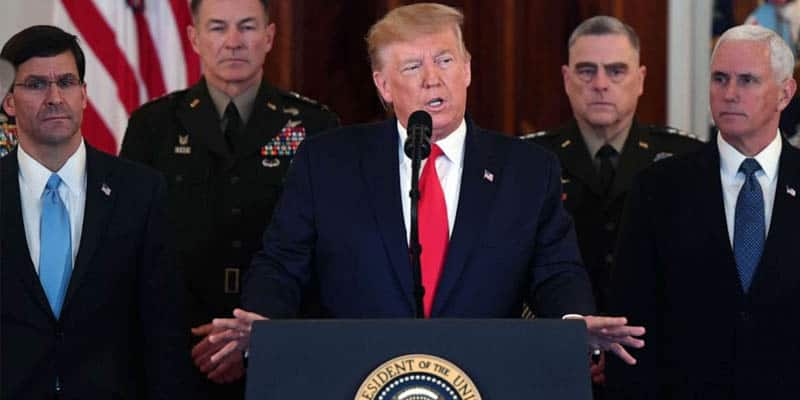 Whether it’s surviving his pending impeachment trial, increasing his odds of winning the presidential election, or taking out a terrorist leader in the Middle East, one thing is a safe bet.

President Donald Trump, in one way or another, will have the world’s attention for the entirety of 2020.

And just over a month into the new year, Trump has already received a slew of prop bets from political betting sites and even more after Iran declared revenge on the U.S. following the death of Iranian General Qasem Soleimani.

After Iran launched missiles at two Iraqi military bases that house U.S. forces Tuesday night, the possibility of declaring another war in the Middle East were at an all-time high.

In his speech today, Trump stated, “Iran appears to be standing down, which is a good thing for all parties concerned and a very good thing for the world” and added that “no Americans were harmed in last night’s attack by the Iranian regime. We suffered no casualties, all of our soldiers are safe, and only minimal damage was sustained at our military bases.”

Trump announced that the U.S. would increase sanctions on Iran until it changes its behavior, but that the “United States is ready to embrace peace with all who seek it.”

It appears war has been avoided for the moment, but as we’ve already seen—only eight days into the new year—all bets are off in 2020.

In addition to Trump’s reelection odds, MyBookie has released prop bets on the potential outcomes from the President’s foreign policy decisions in the Middle East.

If a hypothetical “World War III” scenario were to take place, the oddsmakers believe that North Korea, led by Kim Jong-un, is the country to most likely join Iran in fighting the United States.

Which terrorist will the Trump Administration capture/kill next?

With Soleimani now dead, the odds favor Husam Abd-al-ra’uf and Jaber A. Elbanehjaber A. Elbaneh to be the next terrorists the Trump administration either kills or captures. Those two, along with the entire list, make up the whole FBI Most Wanted Terrorists list.

Will Donald Trump reinstate the military draft via the Selective Service System during his presidency?

Following opposition to the Vietnam War, the draft has not been used since 1973. Unless there is a real threat of a “World War III,” it’s highly unlikely to be reinstated by Trump during his first term or second, if he wins reelection.

Despite being 80 years old, this prop appears to hold a decent amount of value, especially if you think Trump won’t win reelection. Regardless, Ayatollah Ali Khamenei is favored not to be alive at some point during Trump’s presidency.

Will America have troops on the ground in Iran before President Donald Trump leaves office?

Both Democrats and Republicans have urged Trump to avoid escalating tensions with Iran any further since the American people are against getting into another “forever war” in the Middle East. As a result, it’s highly unlikely Trump sends ground troops to Iran before leaving office.

Will Switzerland choose a side in an America vs. Iran war?

This prop bet is a reference to World War II, where Switzerland remained neutral while the Axis powers and Allied powers fought each other. The Swiss didn’t take a side during the deadliest war in human history, and it’s highly unlikely they will anytime soon.

If France enters the America vs. Iran war, how long until the French surrender?

Lastly, MyBookie has included a prop bet to troll the French and their reputation for surrendering during conflicts on the world stage. In WW2, France surrendered in six weeks, but the country is part of the European Union now. As a result, they won’t be invaded any time soon with so many allies surrounding them, so the “over” is your best bet.