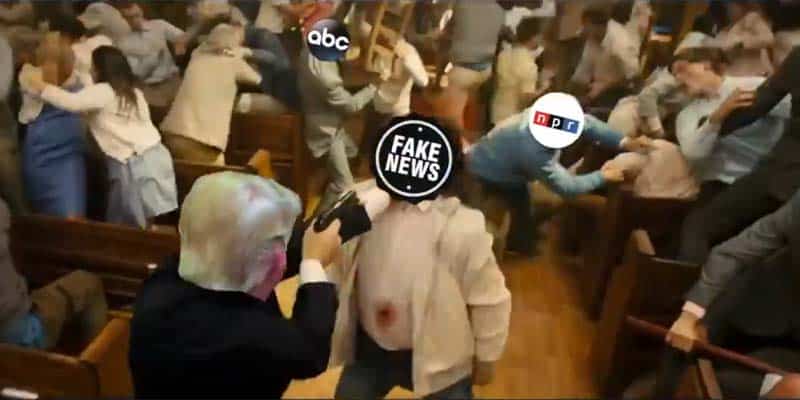 Should we be offended or thankful that Presidential Election Odds didn’t make it onto the video of President Donald Trump killing news sources and political enemies?

Taken from a scene in the 2014 film Kingsman: The Secret Service, the video shows a gunman edited to have Trump’s face killing a church full of news outlets and critics, including CNN, Rosie O’Donnell, and Black Lives Matter.

This video making the rounds that was shown at mar-a-lago of Trump killing all his critics is so evil and irresponsible, not to mention immature, it’s truly beyond words.

Obama, McCain, Blake lives matter, the media..nobody is safe from these monsters. pic.twitter.com/N0NkdW85bi

The video was shown last week during a three-day conference held by American Priority at Trump’s National Doral Miami resort. Although Trump was not present at the event, Donald Trump Jr. and Sarah Huckabee Sanders were both scheduled to speak at the conference.

According to White House Stephanie Grisham’s official Twitter, Trump had not seen the video as of Monday morning, but based on what he has heard, he condemns the edited snippet.

Re: the video played over the weekend: The @POTUS @realDonaldTrump has not yet seen the video, he will see it shortly, but based upon everything he has heard, he strongly condemns this video.

The final killing of the video shows a man edited to represent CNN being staked through the skull. In an official statement last night, CNN called the video vile.

“Sadly, this is not the first time that supporters of the President have promoted violence against the media in a video they apparently find entertaining — but it is by far and away the worst. The images depicted are vile and horrific.”

The CNN statement also calls for Trump to denounce the video immediately or risk endorsing violence.

“The President and his family, the White House, and the Trump campaign need to denounce it immediately in the strongest possible terms. Anything less equates to a tacit endorsement of violence and should not be tolerated by anyone.”

So far, the video has not affected Trump’s impeachment odds as the President is still favored to be impeached in his first term at -135 chances.

The video has also left Trump’s reelection odds unscathed as he is still the favorite in 2020.