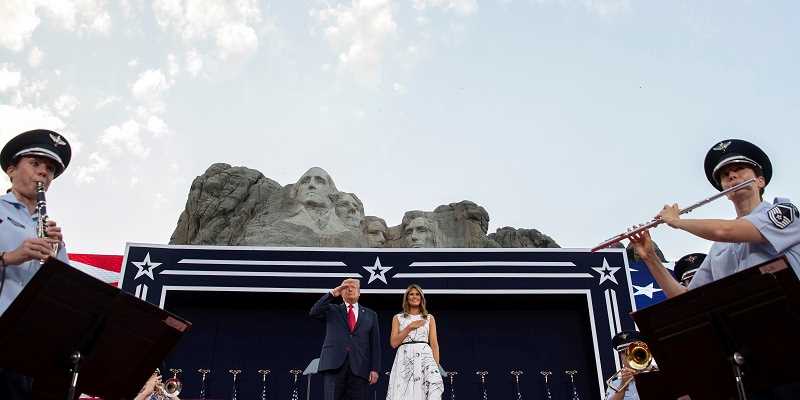 6 Non-Presidents Favored Above Trump To Be Added To Mt. Rushmore

Although Donald Trump has taken a stance that he was joking about his face being etched into Mt. Rushmore alongside former Presidents of the United States George Washington, Thomas Jefferson, Theodore Roosevelt, and Abraham Lincoln, political sportsbooks are taking it seriously.

Although you can bet on President Trump to be added onto Mt. Rushmore, his chances are incredibly low. The below Mount Rushmore political prop bet been posted at BetOnline Sportsbook, and include six non-Presidential options.

Next Person To Be Added To Mount Rushmore

After reports surfaced that President Trump had spoken with South Dakota Governor Kristi Noem on more than one occasion about his visage donning the side of Mt. Rushmore, his team backed off of the accusation, claiming that it was said in jest.

In a recent meeting between Governor Noem and Trump, she presented the President with a four-foot-tall reproduction of Mt. Rushmore with his face included on it, according to a CNN report.

Although the notion of Trump being added next to such renowned political figures from our nation’s history may seem ludicrous to many, it doesn’t to him. Just ask him!

Although there have been no official discussions regarding amending the Presidential carvings at Mt. Rushmore, there are a host of candidates with betting odds for being the next addition, and not all of them are former commanders-in-chief.

If indeed an extra person is added to the collective, perhaps betting on Barack Obama is the most likely option. He is an ex-President, he is the first non-Caucasian to sit in the Oval Office, and he is likely to be remembered fondly by future generations.

Obama’s +5000 odds will payout at $5 grand for each $100 risked. That’s a great reward for not much risk but it could take a long time to cash in, as there are no plans on the table for any alterations to the mountainside at the moment.

The final etchings were made on the Mount Rushmore National Memorial in October of 1941, so the chances of a modification eighty years later are slim.

There’s also that little problem of spacing. According to park officials, there is no room on either side of the monument for a full-size facial carving, and what space is there contains rock that is unfavorable for sculpture.

All hope is not lost for Trump, though, as Governor Noem has said that Trump can pick another mountain within the region of Rushmore for his monument, and she doesn’t appear to be kidding.

Perhaps Trump can erect a memorial that is more bigly that overlooks his predecessors. He’s got a great eye for real estate and is probably location hunting now.