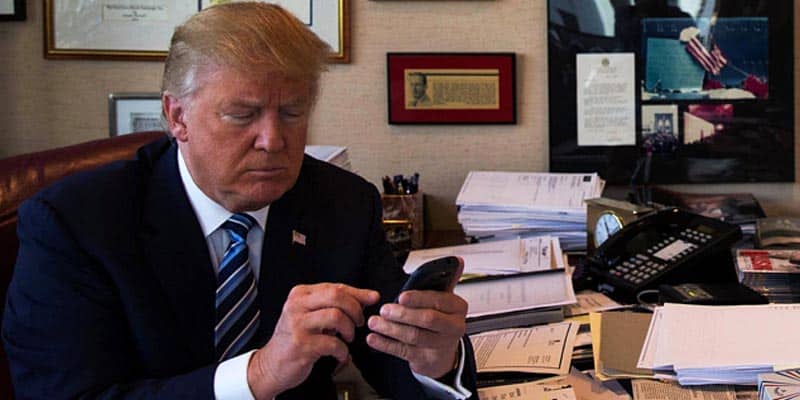 George Carlin is arguably most famous for his “Seven Words You Can Never Say on Television,” monologue from his 1972 stand-up comedy album Class Clown.

President Donald Trump, while being famous for many things, his well-known for his use of colorful language. Thanks to Bovada, these two masters of speechcraft are finally intersecting.

WARNING: Just because Carlin said these words are not allowed on television does not mean they’re disallowed on Presidential Election Odds. This story features strong language suitable for mature readers only.

Carlin’s “Seven Words,” also known as “Filthy Words,” “Forbidden Words,” or “Dirty Words” in subsequent stand-ups, are a list of words that are consistently censored on television. Even today, most of the words remain taboo.

According to the mastermind himself, the words are:

Although Trump has tweeted these words, or variations of them, multiple times before, including his use of “BULLSHIT” earlier this month, Bovada does not predict that the President will use another before the end of the year.

The Do Nothing Democrats should be focused on building up our Country, not wasting everyone’s time and energy on BULLSHIT, which is what they have been doing ever since I got overwhelmingly elected in 2016, 223-306. Get a better candidate this time, you’ll need it!

As of right now, oddsmakers give -1000 odds to Trump keeping any profane language outside the Forbidden Seven.

Will Trump tweet any of George Carlin’s “Seven Dirty Words” before January 1, 2020?

Most of these words are still censored on television in the United States, although many are becoming more casual and commonplace. This is especially true for “piss” and “tits.”

It’s likely that Trump’s administrative team will do their best to prevent the President from using words like “tits” due to the “grab her by the pussy” controversy. Interestingly enough, Trump also used “tits” to refer to a woman’s breasts during this same 2005 conversation.

The same logic can be used for “cunt,” but it is not likely to be used by any American politician anyway, even Trump.

Nevertheless, tweeting “piss” could still be a possibility for a man with over 45,000 tweets and counting daily. What makes “piss” such a likely contender is its versatility and relevance to Trump’s current Twitter trends.

The POTUS could use the word in a number of ways. “The Do Nothing Dems are pissing me off,” or “If Dems didn’t piss away all the nation’s money we could fund our military better.” These are all hypothetical, of course.

“Cocksucker” is another word that is completely off the table for anyone in the political sphere due to its negative homophobic and slut-shaming connotations.

There’s the chance Trump drops a few F-bombs on Twitter before the end of 2019, but most of the President’s foul words have come during in-person speeches and interviews.

For reference, the following video is a mix of Trump’s dirty language outside of Twitter.

Bovada also lists Trump’s political betting odds on their site. Based on the numbers, the President’s +120 reelection odds are sitting favorably compared to the competition.