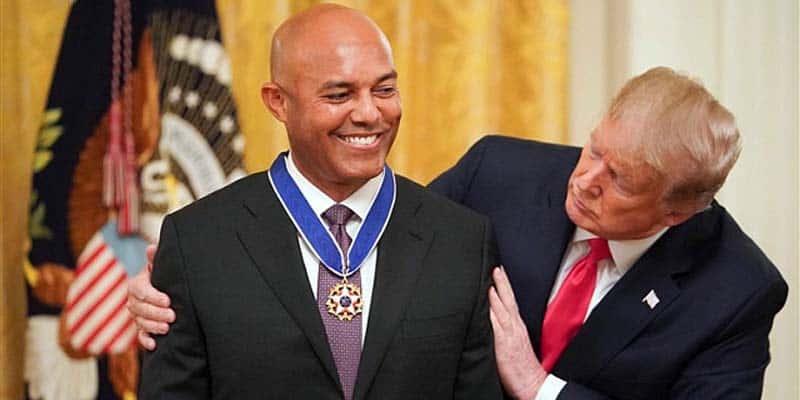 Presidential Medal of Freedom odds: Will another athlete be Trump’s next recipient?

Originally established by President John Kennedy in 1963, the Presidential Medal of Freedom is the highest civilian honor in America.

According to the White House website, the Medal of Freedom is given to “individuals who have made exceptional contributions to the security or national interests of America, to world peace, or to cultural or other significant public or private endeavors.”

The award is not reserved for any particular group, proven by the diversity of its recipients. Past winners include Toni Morrison, Ellen DeGeneres, Yo-Yo Ma, Joe Medicine Crow, Pope John XXIII, and Jesse Owens.

President Donald Trump—who’s currently favored to win reelection in 2020—has recently focused on giving the medal to athletes.

The last three recipients, Mariano Rivera, Jerry West, and Bob Cousy, all received the Medal of Freedom between August 22 and September 16 of this year.

This trend is probably why Bovada favors another athlete to be the next recipient at +175 odds for this prop bet.

In which field will Trump’s next recipient of the Presidential Medal of Freedom be attributed?

Odds are from the Political Futures section at Bovada Sportsbook

However, Trump has given the medal to more than just sports figures. Elvis Presley earned a posthumous Medal of Freedom in 2018 with economist Arthur Laffer being honored in 2019.

Presley, a member of the arts community, and with Laffer apart of the business world, the odds show that another member of either could be the next honored individual.

The field of arts and media have +225 odds of producing the next Medal of Freedom honoree. Business and economics have +450 odds.

Sharing the +450 odds with business, the field of philanthropy and philosophy also have the same chances.

Although a philosopher hasn’t been honored since Ronald Reagan bestowed the medal upon Sidney Hook, Trump gave the medal to philanthropist Miriam Adelson last year.

For the bottom three fields in the odds, science/medicine, education/history, and religion/technology, Trump has never given out a medal.

With +3300 odds, the science and medicine fields haven’t had recipients since Barack Obama gave the medal to physicist Richard Garwin in 2016 and epidemiologist William Foege in 2012.

Sharing +4000 odds with education/history, religion and technology’s last medals were given to computer scientist Margaret Hamilton in 2016 and Archbishop Desmond Tutu in 2008.

It’s important to note that Donald Trump himself must be the one giving the recipient the medal. And with recent developments and Trump’s odds of impeachment becoming more likely, it’s worth taking that into consideration.