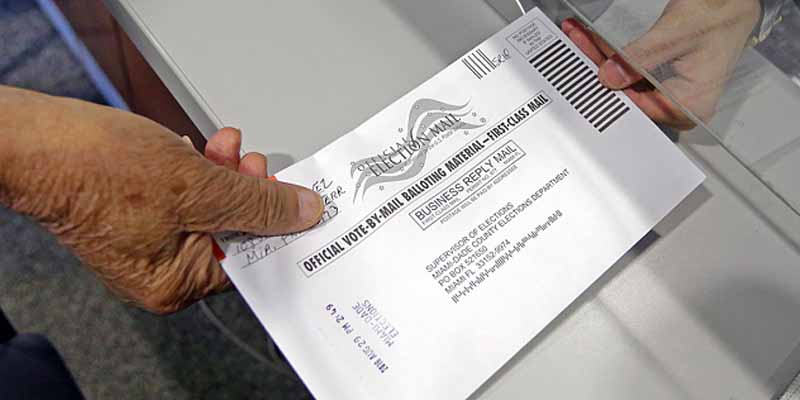 President Trump has made several statements over the last couple of months regarding his disdain for the expanded use of mail-in ballots in the 2020 Presidential elections.

The demand for mail-in ballots has increased due to coronavirus quarantine regulations and restrictions against large public gatherings. Per the left, voters should not have to risk their lives just to ensure legitimate election results, and mail-in ballots seem like a reasonable alternative.

So, what is driving President Trump’s opposition to widespread mail-in ballot use in the coming election? He asserts – as do many others – that it allows for fraudulent votes to be easily forged and submitted, breaks the chain of custody, and encourages ballot harvesting, which is illegal in some states.

Thus, Trump predicts that the 2020 Presidential election will be the most corrupt in the history of politics in the United States.

In a shocking admission, CNN news has stated that “there’s very, very little evidence in past elections that there is widespread election fraud,” regardless of which method has been used.

That is a surprising statement from CNN when considering their stance that George W. Bush stole the 2000 Presidential election from Al Gore. Credibility isn’t the outlet’s strong suit.

“Research” has revealed 31 instances of voter impersonation between 2000-2014 out of over a billion votes during that time. These “studies” have been confirmed by “research teams” employed by both sides of the political aisle, inferring that elections in the United States have been on the up and up and are nearly impenetrable to fraudulent voting activity, despite many documentaries that suggest otherwise.

Even Republican stronghold Fox News has come to the same conclusion that the USA’s election process is sound and has virtually no opportunity for corruption during the process.

So, what has got President Trump so paranoid about the mail-in ballots?

Perhaps it is due to his current lagging status in Presidential polls that have him down by nearly 20 points to Democratic candidate Joe Biden. It would behoove Trump to limit the number of voters to those that support him, and the inclusion of mail-in votes will hurt his reelection chances. So the story goes. Democrats, it seems, have unique difficulties in getting to the polls.

Could it be Trump’s sensitive ego preparing to reject the election tallies in November?

It seems clear at this point that any result other than a victory for his campaign will result in cries of a corrupt and rigged election, complaints that will likely be echoed by his supporters (and, naturally, the other side should Trump win in November, as we’ve heard nonstop since late 2016).

Prior to the outbreak of COVID-19 in the United States, and before the Black Lives Matter protests that condemned the killing of George Floyd by Minneapolis police, Trump held a strong advantage over Biden in the betting odds.

Of the major political sportsbooks that we recommend, only one, MyBookie, has maintained Trump as an odds-on favorite to win his reelection efforts this fall.

That all changed today, as MyBookie now features both Biden and Trump at -120 odds to win in November.

For bettors that still think that Trump will win his reelection, this is good news, as now would be the best time to place a wager on his chances.

This is also a great example of why we recommend belonging to multiple political sportsbooks, because finding Trump’s longest odds will provide the highest payouts.

The only reason to not wager on Trump right now is if bettors think his odds will continue to slip, and considering the current political climate, there’s every reason in the world to believe that will happen.

But the debates are in almost exactly three months from today, and those will be game changers, both in the polls and on the betting boards.