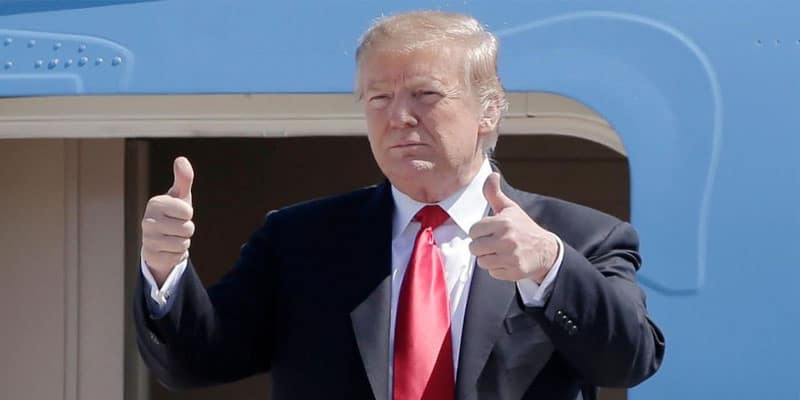 Things have never been better for Trump — and that includes his betting odds to win the 2020 presidential election.

Oddsmakers continue to push President Donald Trump’s 2020 re-election chances higher following the release of the Mueller report and today, his odds hit a new all-time high of +125 ($100 bet wins $125) which gives him a 44.44% implied probability to take back the White House next year.

The redacted version of the Mueller report was released to the public by the Justice Department on Thursday, April 18, and Special Counsel Robert Mueller stated in the report that the investigation did not find evidence of Trump-Russia collusion and that his office was unable to reach a conclusion on obstruction of justice.

And while the Special Counsel didn’t reach a conclusion on obstructing justice, this does not clear Trump of the charge because the report lists several instances where the president sought to undermine the investigation taking place.

Mueller said in the report that the special counsel office “gathered evidence … relevant to the elements of those crimes and analyzed them within an elements framework—while refraining from reaching ultimate conclusions about whether crimes were committed.”

The lack of a definitive conclusion is because the longstanding guidelines held by the Office of Legal Counsel are to not bring indictment charges against a sitting president due to the possibility of it having a negative effect on the person’s ability to govern.

Congressional Democrats are expected to announce their plans in the coming days on what should result from the findings from the Mueller report.

However, all of this has led to oddsmakers increasing Trump’s odds of winning the White House in 2020 incrementally ever since Special Counsel Robert Mueller wrapped up his investigation and Attorney General William Barr released his 4-page summary on the findings of no collusion from the report on March 24.

Prior to Barr’s summary of the Mueller report, Trump’s 2020 odds were listed at +175 at BetOnline, which gives him an implied probability of 36.36% to win next year’s presidential election.

However, after Barr’s summary was released, his odds improved to +150 and then again to +140 — likely due to an influx of public money that came in on the president’s betting line.

This gave Trump a 41.67% implied probability heading into April, an increase of 5.31% following Barr’s summary.

After the redacted version of the Mueller report came out last week, his odds jumped up again to +130 before the Easter weekend and currently sit at +125.

For Trump, +125 is an all-time high for his 2020 election odds and gives him an implied probability of 44.44% to be elected into office for four more years.

Additionally, this makes Trump the heavy favorite out of all the candidates — Republican or Democrat — currently running for president in 2020.

Bernie Sanders, Beto O’Rourke, Joe Biden — who has yet to announce — and Pete Buttigieg are currently in a four-way tie in 2nd place behind Trump with 2020 odds at +800.

This gives each of the leading 2020 Democratic candidates an implied probability of 11.11%, which when combined, equals Trump’s 44.44% chance to win the presidency.

It’s unclear to read public perception of the Mueller report currently since it’s still fresh and there are over 400 pages to sift through and analyze.

However, what is clear is that the release of the Mueller report has had a positive effect on his betting odds and chances of getting re-elected in 2020, according to oddsmakers and the public money that has been wagered on his betting line.

A lot can happen before Tuesday, November 3, 2020, but as April 2019 wraps up, Trump’s odds of winning the 2020 presidential election have never been greater.