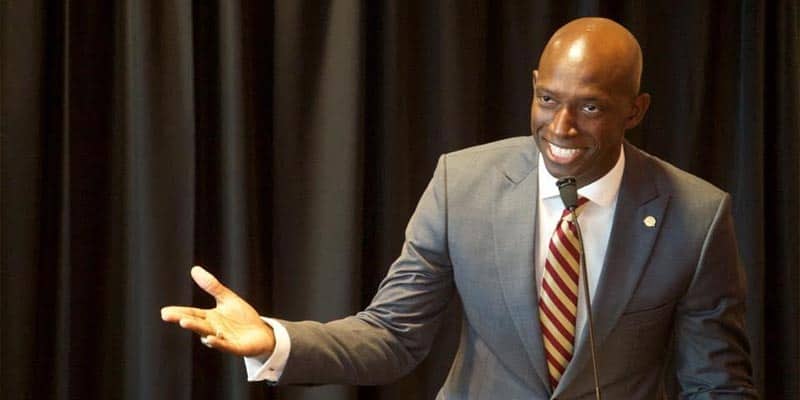 The odds of winning the Presidency—or any election—are always low for anyone isn’t an established household name.

For Wayne Messam, who was one of the more relatively unknown 2020 Democratic candidates, he was never able to turn the odds in his favor.

As a result, Messam announced on Wednesday he would be ending his longshot bid for the White House and thanked everyone who supported him on the journey.

“I am Suspending My 2020 Presidential Campaign But I’m Not Finished Yet” by @WAYNEMESSAMhttps://t.co/Isdb7jGlya

“I launched my 2020 Presidential Campaign eight months ago back in March as the son of Jamaican Immigrant parents,” Messam said in a Medium post. “They risked it all and left everything behind in their native land to chase the American Dream. Because of their sacrifices, I am living the American Dream they worked for and earned.

“Ponder this,” he continued. “Growing up in rural sugarcane country in South Bay, Florida, I was never expected by society to be much. Despite those odds and low expectations, my life and experiences exemplifies what the Promise of America is all about.”

For Messam, a wide receiver on FSU’s 1993 national championship team and the first black mayor elected in Miramar, Florida—a population of around 140,000—his 2020 campaign was among the longest of longshot bids you’ll ever see for the White House.

Messam’s chances were so low that oddsmakers at political betting sites never listed him on the board, which isn’t out of the ordinary for candidates trying for the first time to make a name for themselves.

Unfortunately, his White House bid never picked up momentum after he announced back in March. Messam was never able to climb up the polls, make the debate stage, or receive odds to win the Democratic presidential primary election.

Fundraising was a struggle as well, and his campaign raised roughly $15,000 in the third-quarter while spending around $11,000 over the same time period.

As for what’s next for Messam, the mayor said he continue engaging with the voters during this election cycle to “ensure that we defeat Donald Trump.”

“There are many rumors concerning my next steps in service and they are just that, rumors. I will continue to serve our great City of Miramar, Broward County, the State of Florida and these United States of America,” he said.

“I have not given up hope,” Messam stated at the end of Wednesday’s post. “I know the Promise of America is still for all of us. We all can take a stand to ensure the American Dream that attracted my parents and so many others to this great nation can still be achieved.”