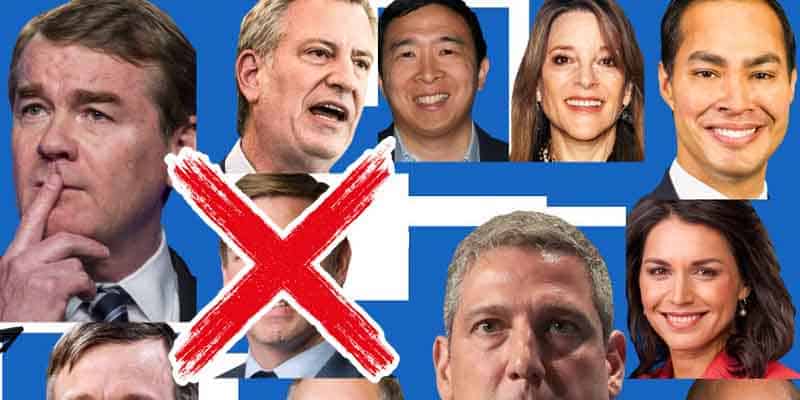 2019 Democratic prop bets: Who is going to drop out first?

New prop bets are available and they all focus on the candidates’ futures in the presidential race.

BetOnline is currently taking action on four props that ask a simple question: who will drop out first?

The first matchup is between former Texas Rep. Beto O’Rourke and former HUD Secretary Julián Castro. O’Rourke’s odds at +3300 to win the Democratic nomination are better than Castro’s +6600 odds, at the moment.

The odds on the bet favor Castro (-140) dropping out before O’Rourke (+100), although the numbers are close between them both. However, O’Rourke has already qualified for the third Democratic debate while Castro is still short on his polling numbers.

If Castro does not make the third debate cut, it’s likely his presidential run will be over.

Sen. Cory Booker and entrepreneur Andrew Yang are the next to matchup. Yang’s nomination odds are actually pretty good at +1200. Booker’s are less favorable at +3300, but still not terrible.

Booker is expected to drop out at -200 before Yang at +150. Ironically, Booker has qualified for the third debate while Yang still needs to reach the polling requirement to qualify.

Taking Yang could payout here if he doesn’t make the third debate in September.

Rep. Tulsi Gabbard had a strong showing in the second debate last night, pushing her odds of earning the Democratic nomination to +2000. Sen. Kirsten Gillibrand did not do as well, dropping her odds down to +10000 from +8000 prior to the debate.

This bet seems pretty cut and dry, especially with their performances in Detroit. Gillibrand is set to drop before Gabbard and their odds, -300 to +200 respectively, reflect that.

With none of these candidates holding good odds to win the Democratic nomination, any one of them could drop first. It might just come down to which is the most stubborn.

The next debate is not until September 12 and 13, assuming more than ten candidates qualify and force a two-night event. However, keep an eye on these bets because the candidates can drop out of the race at any moment.

To watch the next debate, tune into ABC, Univision, ABC News Live, ABCNews.com, Hulu Live, The Roku Channel, or Facebook Watch for the coverage.

The list below has each candidate’s odds to win the Democratic nomination for the 2020 presidential election.